The pricing of pharmaceuticals has always been in the news - always meaning from the 1890s to the 1950s and forward.  But it's especially in the news in the past couple years; see an April 2016 article in Forbes here.

A number of new pieces on value based pricing have just appeared.  ICER, the Boston-based thinktank for drug pricing that was cited several times in CMMI's current Part B value based drug payment proposal, released a "scoping document" for upcoming reviews of multiple myeloma drugs in February 2016 (here) and a final version in March (here).


On March 31, Amgen released a response to ICER, focused on the future evaluation of its drug Kyprolis (carfilzomib) - here.

Also on March 31, Steve Ubl of PHRMA and Dan Leonard of the National Pharmaceutical Council (NPC) released a joint OpEd in The Hill / Congress Blog on what should be the principles of value assessment that is appropriately patient centered - here.

The OpEd points to a 10 page NPC white paper on "guiding practices" for value based assessments (here) and see also a 15 page NPC white paper on the "landscape" of current value based frameworks (here).  Authors of the "landscape" specifically describe it as carrying forward and adding detail to a December 2015 NEJM article by Neumann & Cohn (here). 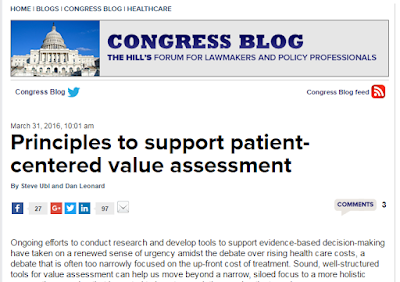 For an opinionated and colorful blog on ICER, here, here.