How Fast is Liquid Biopsy Going? Insights from Sacher's Paper on ddPCR in Lung Cancer

On April 7, 2016, JAMA Oncology published a 180-patient study in which each lung cancer patient had paired liquid biopsy samples (ddPCR for EGFR and KRAS) along with tissue biopsies.  The data is extremely interesting and seeing a paired blood/tissue study with this many patients is very helpful for understanding how fast the clinical adoption of liquid biopsy is likely to move.  The paper is online here.  It's listed as "Free."  Details after the break.

Detection of tumor DNA in blood is moving quickly, one landmark being the April 13 approval of the Epigenomics blood-based screening test for colon cancer (here).   Another landmark is Sacher et al.'s study of 180 lung cancer patients with paired tissue and blood studies for EGFR and KRAS mutations.

The authors studies 180 lung cancer patients, 120 newly diagnosed and 60 who had acquired resistance to EGFR inhibitors.  The study design is impressive and yields several important types of data.

First, the positive predictive value of a mutation found in blood was 100% for several mutation categories.   However, not all T790M positive patients had tissue-positive confirmation.  T790M logged some some "false positive" results (see "FP" in figure below), but in this context, it raises the honest question of whether the tissue or the blood data is more accurate, as the authors note in their discussion.  The single tissue biopsy might have entered a metastasic site that had not yet developed the T790M mutation that was found in other tumors and was circulating in blood. 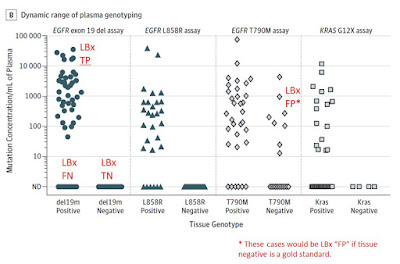 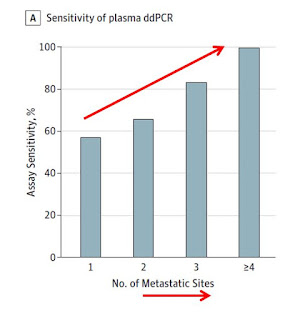 Third, the authors find that turnaround time was drastically improved with liquid biopsy, with medians of 2-3 days (range, 1-7 days).  In comparison:
The authors also conducted several repeat liquid biopsies after therapy was initiated, finding several patterns of response, including loss of detectable mutations in blood, or no change in detectable mutations in blood.  The ddPCR assay was logarithmically quantitative, as shown below, with interpretable results in the range of 100 to 50,000 units per mL. 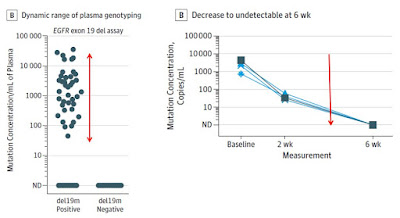 Finally, the authors provide a radiologic image of the clinical impact of targeted therapy, in this case, a woman who had become erlotinib resistant due to an induced T790M mutation, but remained highly response to the third-generation drug osimertinib.  Liquid biopsy and tissue biopsy produced the same genomic result but the liquid biopsy result was available 24 days earlier.

One potential application, when the world is ready for it, might be to place liquid biopsy first in line, and when a positive driver mutation is found, act on it.   When no driver mutation is found, because a false negative is possible, reflex to an invasive biopsy.   The difficulty with this today is that the ddPCR method in blood, used by Sacher et al., does not detect all important categories of mutation. The authors write that ddPCR was not good for detection of either copy number variation or fusion mutations, but that these could be detected by other blood based technologies such as NGS.

Footnote.
The authors also studied several different shipping and processing methods, and found the ddPCR methodology remained accurate.  This is important due to the complex nature of blood and the low concentration and uncertain stability of free tumor DNA fragments.