Epigenomics Epi proColon - Part of the Story Behind the Story

After a several-year journey through FDA advisory boards, extra studies, and FDA reviews, PMA approval of the Epi proColon test was announced on April 13, 2016.

Epigenomics, based in Berlin and Maryland, is publicly traded overseas.  The stock has roughly tripled from January to April 13.  As of today, it has a market cap of 124M euros.*  The stock popped 20% today, probably not more because the company has been assuring investors since January that FDA approval was expected and imminent.

Part of the "story behind the story" is at the website Seeking Alpha under the EP Vantage newsletter channel.  Interesting reading (here).  More after the break. 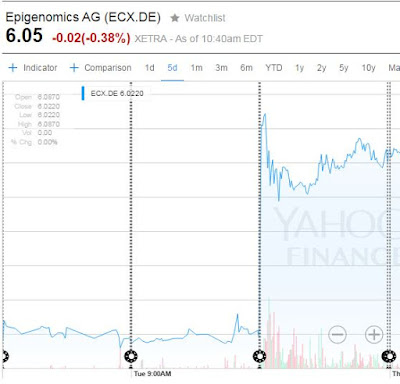 The full piece is worth a read, but a few key sentences here.  After a flat rejection of its data by the FDA:


“We had a discussion with the FDA and it turns out they were not quite comfortable yet with the data we had provided, but they didn’t really know what else to ask for,” Thomas Taapken, the group’s chief executive, tells EP Vantage.

The [company] decided that if the FDA could not be more explicit in its demands – and firmly believing that no new studies could make any difference to Epi proColon’s approvability – it would simply ask again [for approval with the same data].

Probably part of the FDA battle was coming to an agreement on the exact text of the 33-word indication, quoted below from the Epigenomics press release (here):

Epi proColon is the first FDA approved test for an indication based on circulating tumor DNA.

For coverage at Genomeweb, here.  At Gray Sheet (subscription), here.

___
*For comparison, Epigenomics' market cap this week is already as large as Veracyte and about one-fourth as large as Foundation Medicine.