Next to universal coverage, getting a grip on costs and quality in chronic care is the holy grail of health reform.  In December 2015, the Senate Financed Committee issued a 30 page white paper "Bipartisan Chronic Care Working Group Public Options Document" with a call for public comments, see the white paper PDF here.

In early February 2016, the committee released an index to the over 300 public comments they had received, online here.

In the cloud, I've uploaded the white paper the index to comments, and a personal selection of about 40 public stakeholder comments culled from the 327 submitted.  For example, I culled the AMA, American Hospital Association, Alzheimer Association, Davita & Fresenius, American Telehealth Association, Advamed, BCBSA, Aetna, and a couple dozen others, for the Zip file.  Here. 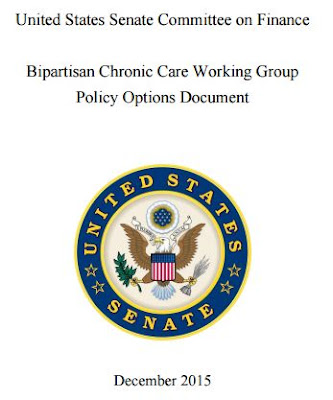 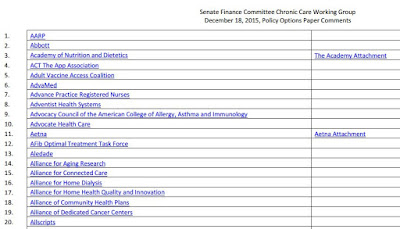 Telemedicine is by far not the only topic in the Chronic Care white paper, but it is a significant one.  But for a subscription Gray Sheet article focusing on Senate Finance Committee telemedicine issues & stakeholder responses, here,   Along this line, track also:  Senate Bill 2484 (introduced with fanfare in February 2016) which would somewhat enhance Medicare telemedicine benefits, in keeping with themes in the SFC White Paper.  Here.