Beginning in 2013, AMA CPT began issuing several hundred codes for specific genes (such as KRAS) as well as "Tier 2" codes which are organized in 9 ascending levels of complexity and which, in total, contain over 500 gene names.

The CMS MolDX program covers a limited number of single genes by name within the Tier 2 codes.  For these, it publishes pricing.   It does not provide one blanket price per Tier 2 level, but prices its gene by name individually.  There is wide variance for the prices of covered genes within each AMA CPT mopath tier.

For 2016, the pricing was updated on the MolDX website (their table online here).  Tables and graphics after the break.

Pricing here in columns by tier (tier 1, 2, 3, etc) and the dollar values per tier listed from lowest to highest (e.g. $46 being the lowst price gene): 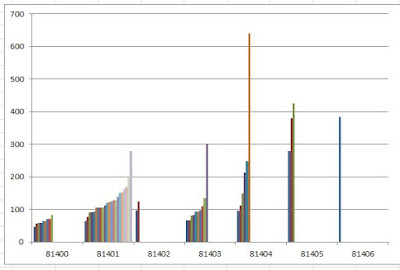 
As per Change Request (CR) 9465, CMS released the 2016 clinical laboratory fee schedule for tests reported with Tier 1 CPT codes. The table below lists the fees established for Tier 2 covered tests. Please note the genes are sorted by CPT code and then by alpha per gene. In Tier 2 codes multiple genes are listed under a single code. The required identifier assigned and submitted with each test enables MolDX to apply the appropriate fee for the specific test performed.