Note: There have been several updates after this 2015 blog, most notably, a 2018 rule, implemented in 1/2020, that outpatient genomic tests are billed by the lab that performs them (be it the originating hospital lab or the reference lab).  See ongoing updates at CMS home page for 14-day-rule:
https://www.cms.gov/Medicare/Medicare-Fee-for-Service-Payment/ClinicalLabFeeSched/Clinical-Lab-DOS-Policy#:~:text=In%20general%2C%20the%20date%20of,patient's%20discharge%20from%20the%20hospital.
ORIGINAL BLOG 2015
Babe Ruth marveled that he got "paid for playing baseball," since it was so much fun.  I marvel that I get paid for explaining Medicare's lab test "14 day rule" - because it is so bizarre. 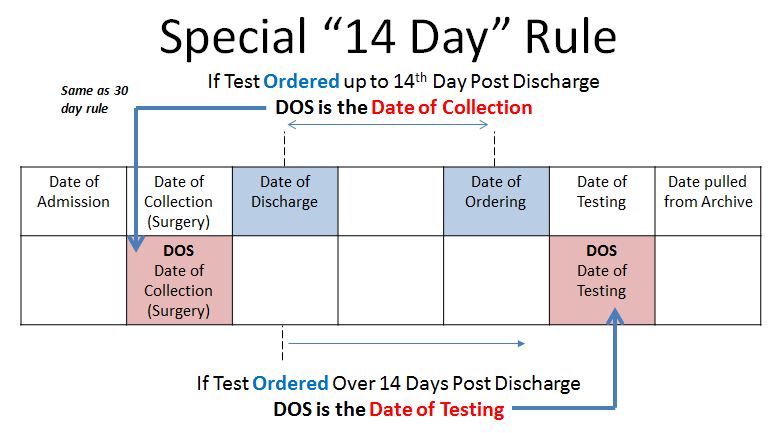 For some examples of how unpopular this rule is in policy circles, see here.   More after the break.

CMS wanted to apply the rule to "bundle" hospital outpatient specimens to the hospital where they originated, and so CMS elevated the rule from mere policy to formal rulemaking in 2006.  Some labs protested that 30 days was too long, so CMS made a 14 day exception: if the test is ordered 14 days after a hospital inpatient or outpatient biopsy, then, the date of service is neither the date of specimen collection, nor the date of pull from an archive, but yet another date, the date of test performance.

CMS quickly emphasized that if the date of service rule placed the "date of service" (which is now an administrative fiction, not a real date of a real lab service) on a day when the patient was in a hospital, then only the hospital could bill for it.   So if a hospital draws outpatient blood on clinic patient Mary Jones on July 1, and does three tests itself, and sends one esoteric test to Quest on July 8, only the hospital can bill Medicare for the test.

Wait again - up til January 1, 2014, after which, Medicare "packaged" all clinical chemistry tests to the hospital outpatient office visit or service payment, and nobody could bill for the test anymore.  Unless, through another exception, it was a human genetic test (defined by AMA CPT code series.)  (HIV viral load tests - not a human genetic test.)

And as of January 1, 2015, most pathology tests on hospital outpatient specimens are also bundled.

I've attached a six page PowerPoint deck with my best current efforts to illustrate the rule graphically.  I start with the original 30 day rule, because the 14 day rule is actually only an exception to the previously stated 30 day rule.   PowerPoint deck in the cloud, here. 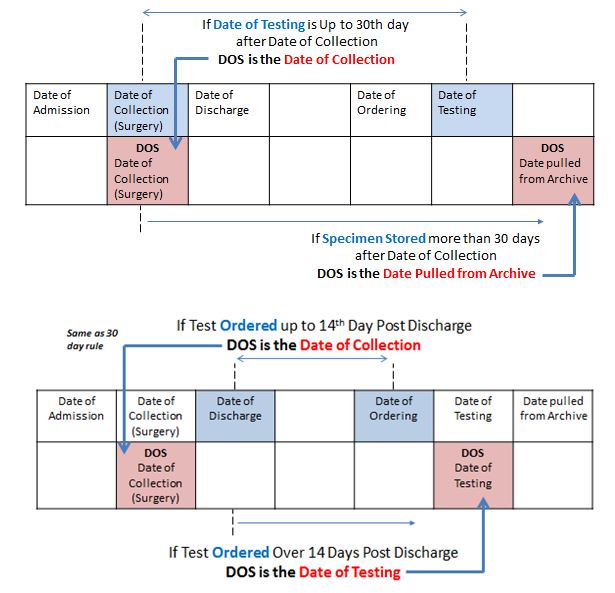 For an article on the 14 day rule ACA demonstration product, see here.

A patient is hospitalized July 1, with surgical biopsy that day.  60 days later on August 30 he is finally discharged.

A test is ordered by the attending on August 10 and run on DNA newly extracted from the paraffin block on August 12.  What is the DOS?  Who can bill?

Answer:  DOS:  The 30 day rule initially locks the DOS as the "date of specimen collection" (July 1).   The 14 day rule does not apply (the new test is not ordered 14 days after discharge.)  The Archive rule states that if a specimen is pulled from an archive after 30 days of date of collection, then, the DOS is the date pulled from an archive.  If the specimen is pulled on August 11 (between the order and the extraction), then that is the DOS, the "date pulled from archive."

Who can bill?  August 11 is a date that falls during the hospital admission (July 1 - August 30) so it falls under the DRG and no one can bill.

I am not an attorney and this blog represents my best understanding from general policy perspective.  For compliance decisions, contact a compliance expert or health care attorney.   To discuss how the changing healthcare system and Medicare policy affects your company, association, or venture capital decisions, contact Dr Quinn through bruce@brucequinn.com  (Bruce Quinn Associates LLC).