On July 1, 2022, AMA released new PLA codes.   In this quarterly process, AMA released codes applied-for three months early (around April 1).  The PLA codes will be effective October 1, and will be nationally priced by CMS next summer (summer 2023).

If some of these look familiar, they were all included in the June 23 CMS public comment meeting on new test codes for 2023.
Note that regarding 0335U, fetal sample for whole genome sequence analysis, actions like abortion following genetic anomalies have been controversial, including a national Senate bill (S.75) with 26 sponsors, allows civil actions against an abortion provider to be brought by grandparents of the unborn child.  The bill also includes criminal penalties under a separate clause.    The Senate bill also makes it unlawful to transport a woman across a state line for this purpose.  This bill is specific to anomalies linked to chromosome 21.  There is a clause (g) that any nurse, counselor, or health professional "shall report" violations to law enforcement, lack of doing so carrying 1 year imprisonment. 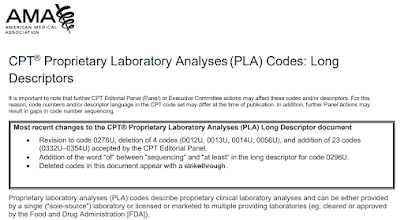