Could CMMI Survive Challenge at the "Gorsuch Court?"

I'm not an attorney but I'm writing as a full time expert in health policy.   I think that if you put together three things - (1) the law that created CMMI, Medicare's Center for Innovation, and (2) legal arguments made in the case against the Trump "Most Favored Nation" drug pricing rule from CMMI, and (3) writings from the "Gorsuch Court" in the current OSHA case, the outlook for CMMI would not be good.

This Blog Also Available in Video
See the seven-minute video based on this blog - HERE.
___
Let's take the three main points in sequence.
1.  SSA 1115A - Creates CMMI
The Center for Medicare & Medicaid Innovation - CMMI,  or CMI, [FN1], also called CMS Innovation Center - was created as part of the original Affordable Care Act in 2010.  It's located at SSA 1115A, and CMS treated the statute as self-implementing (they didn't undertake rulemaking before setting up CMMI.)
There's a lot of webpages for CMMI at CMS - here.   It's authorized to create and run any number of "models."  The statute describes no limits on the size or duration of models, but shields them from judicial review at 1515A(d)(2).   The statute also allows CMS to waive any law in Medicare or Medicaid for the purpose of carrying out a model at (d)(1).
As I covered in this blog at the time, in 2016, Republicans on the Hill were highly distressed about CMMI (under Obama) and held hearings with a very negative bent, and Trump's first Secretary of Health was anti-CMMI.    In their first years, both the Trump and then the Biden administration have offered major "reboots" of CMMI.  However, the "unlimited" powers of CMMI are tempting.  The Obama administration offered a national drug repricing law under CMMI - discontinued in the last days of the Obama administration.  In its last months, the Trump administration offered an even bigger "most favored nation" (MFN) drug repricing law created suddenly by the CMMI.   MFN was fast thrown out in court and slowly, in the ensuring year, formally withdrawn by the Biden administration.
(Tidbit - CMMI, at SSA 1115A, sites adjacent to historical law for Medicaid waivers, SSA 1115.)
2.  MFN CMMI Demonstration - What Court Records Show
The Trump administration had Rose Garden speeches and executive memos about drug repricing, but the actual achievement was Interim Final Rulemaking - essentially, emergency rulemaking - introducing "most favored nation" pricing, where Medicare drug prices would be pegged to international benchmarks (in the lame-duck phase, November 27, 2020).   This was rapidly challenged in court, and implementation was stopped by the courts.   After implementation was stopped by the courts, the Biden administration withdrew  the ruling rather than fighting for it in higher courts.   The final CMS action in the MFN withdrawal process was December 29, 2021 at 86 FR 73986.
But let's go back to the court cases along the way.  See the Blake ruling, December 2020 on MFN.  There were three legal arguments against MFN:
1.  CMMI inappropriately created MFN emergency "IFR" rulemaking.
2.  CMMI, the authority, acted outside its scope of abilities in making the MFN model.
3.  CMMI should not exist in the first place, it is an inappropriate delegation of Congressional authority.
Each of these points was argued articulately in the court cases in the effort to throw out MFN.  However, in the pivotal judicial decision, MFN was thrown out on the basis of #1 only.   This follows the legal principal that you don't reach to statutory or constitutional arguments unless you have to.   The judge ruled that MFN was not legitimately justified as reasonable emergency rulemaking.   (For example, if you are going to change drug prices for 8 years, it's not feasible that's an emergency which compels you to skip 30 days of public comment at the beginning.)
Therefore, the court recited, but did not address, arguments 2 and 3. (Remarks quoted at FN2)    Argument 2 in the MFN cases was that Congress could not have intended "model" to mean a sudden massive change in drug pricing law,  nationwide.  While Congress did not precisely define the word "model," it couldn't have meant something so broad.   Argument 3 was that Congress could not, in the first place, have authorized CMMI to issue models unlimited in size and scope and waiving "any" CMS law in the process of doing the model.  (For example, I've joked, CMMI could lower the Medicare age to 55 and call it a twenty-year nationwide "model.")
I've included some of the MFN court filings and the 2020/12/23 Judge Blake ruling in a cloud file here.
3.  SCOTUS Opinions in the OSHA Case
Here's an important what-if.  What if Argument #3 above - that CMMI is an unconstitutional level of delegation - got to the "Gorsuch" Supreme Court?
We have some clues in the current OSHA vaccination case, where the Biden administration used emergency (IFN) rulemaking to require all businesses over 100 employees to either have vaccinated workers or daily masking and weekly testing.   Note that this case didn't reach a final decision, rather, SCOTUS allowed the OHSA implementation to be immediately stopped pending a final decision.  There won't be a final decision, since the Biden administration is withdrawing the rule.
I don't like the term "conservative justices" because they are often in favor of states' rights.   So if a state wants to restriction abortion, they may allow that, as states' rights.  But if a state requires vaccination, they may also allow that, for the same reason, states' rights.  For example, in the current HHS hospital workers vaccination case, Justice Thomas in his dissent was against HHS requiring vaccinations, but noted pointedly that states have the right to require vaccinations under SCOTUS precedents (both being  historical smallpox vax cases).
There are three  conservative opinions in the recent HHS VAX and OHSA VAX cases: 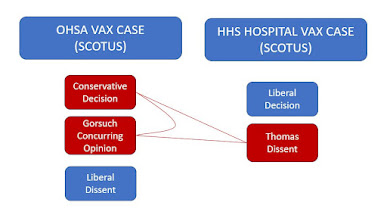 If you go past the headlines, and if you read all three opinions shown in red, you get the viewpoint of what's usually the SCOTUS majority, up to date to January 2022.   It's about constitutional limits, about states' rights, about the original 1788 delegation of powers held by the states (the 13 colonies) to the federal entities, and case law on limits of delegation of authority from the Congress to federal agencies (FN3).   From these readings, it's hard to imagine the majority justices agreeing that (A) it's OK for CMMI to have unlimited abilities in the size, scope, nature, and duration of models, and that (B) CMMI crowns that with the ability of CMS to waive any aspect of CMS law for the purpose of the models.
(See my earlier blog on the OHSA and HHS VAX cases here).
Interestingly, exactly as occurred in the MFN case, SCOTUS would only reach arguments about the constitutionality of CMMI in a case where the issue could not be decided on a lesser point, such as a process violation of notice and comment rulemaking.   (See again FN2).
But if CMMI does reach Judge Gorsuch, would he not repeat what he's already said about OSHA?   "Under OHSA's reading, the law affords it almost unlimited discretion, and imposes no meaningful restrictions that meaningfully constrain the agency" [Cite to TOUBY case, 1991].
My point has been, he could lift this quotation word for word and apply it to the seemingly unlimited authorities asserted for CMMI.
How Could CMMI Find Itself In Front of Gorsuch?

There's no single answer but one possibility might be the "CMMI Medicare Direct Contracting" system, created by Trump and altered and continued forward by Biden.  It's unpopular in some circles - here.

FN1.  The statute calls the center, "Center for Medicare and Medicaid Innovation," and you see it abbreviated often as CMMI.  However, the statute at 1115A immediately describes the abbreviation as "CMI."   You also see "Innovation Center" or "CMS Innovation Center" (which would be CIC, but you never see that choice of abbreviation, since it offers the pronunciation "sick.")

However, her footnote 9 carefully writes, "The court does not today reach the plaintiffs' arguments concerning the statutory authority of CMS [scope too broad] or the constitutionality of the rule [excess delegation by Congress to CMMI].

See also her footnote 17, "The court reiterates that it is expressing  no opinion on the merits of teh plaintiffs' statutory or constitutional challenges to the rule."

FN3.  In 2009, law professor Cass Sunstein wrote an article, Is OSHA Constitutional?  (Cited inside one of the judicial opinions I read above, the BUSH dissent in appellate court filings on the path to the OSHA SCOTUS case).  One could imagine Sunstein revisiting the same  themes under the new title, "Is CMMI Constitutional?"

I have some informal personal links and notes on Direct Contracting here.