The House has passed a bill that will delay a wide range of Medicare spending cuts, including PAMA.  PAMA rate cuts will be delayed for an additional year (out to January 2023).  In addition, I understand that PAMA reporting may be moved from 1Q2022 to 1Q2023, indicating that it would apply to a 1Q2024 new fee schedule.

See press release on December 7 from ACLA, here.  See a letter from numerous groups on December 2 asking the PAMA cuts be delayed here.

See an article at Fierce Healthcare that talks about the range of the cuts and the delays here.  I've read that physicians, in general, faced up to 10% cuts due to multiple reasons and hospitals, 6% cuts.

See a copy of the 7-page bill (in legalese, adding bits of phrases and insertions to various laws) here. 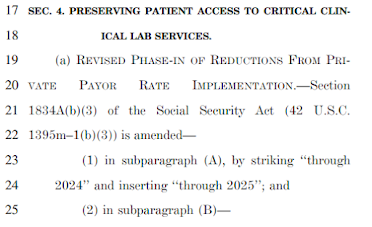