The Office of the Inspector General has issued an overdue report on the massive growth in genetic spending & alleged fraud since 2018.   Find the 21 page report here or here.  I say the report is overdue because it's based on data ending in December 2019, and it's nearly 2022.

The report officially highlights what I vigorously pointed out in Fall 2020 based on  CY2019 data - that anomalous spending in genetic testing had skyrocketed.  The OIG report also builds on a July 2020 white paper (24pp) by the Healthcare Fraud Prevention Partnership - here. 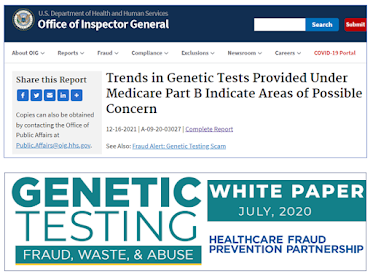 The December 16 HHS OIG report documents (page 19) that the highest-spending genetic code in 2019 (and nearly the highest in 2020) was 81408, a code for a grabbag of very rare genes with full sequence reported.

For a shorter five-part trail of horrors, here:

#1 Which labs?  Billing for 81408 for Medicare patients by familiar labs like Labcorp, Quest, Invitae, Bioreference, Ambry, and others?   Zero.   Look for billing by pop-up places with names like "ABC Lab" and no website.

#2 Which MACs?  As I've documented in the past, billing for 81408 was essentially zero in the MolDx MACs and the NGS MACs, and was concentrated only in the Novitas and FCSO MACs, and briefly in the now-defunct Cahaba MAC.

#3 Complete Incompetence at CMS Office of Program Integrity.  In an ongoing scandal that it would be charitable to call "complete incompetence," the Medical Unlikely Edit, or payment cap, for 81408 is 2, allowing fraudulent labs to bill every case in a multiple of 2 ($4000!).   It would have taken only seconds in 2018 or 2019 or 2020 or 2021 to change this edit to 1, saving Medicare about $150M a year, pretty good return on 30 seconds effort by an administrator.  It's even more bizarre because nearly all genetic codes, including Tier 2 codes, have an MUE of 1.

Hundreds of millions of dollars gushed out long after the torrent of cash had been fully identified.

OIG report (page 14) highlights several categories of fraudulent billing.  (1) Billing for services not performed at all.   (2)  Unbundling of claims or repeat billing.  (3) Blanket ordering of costly panels of rare genes on a series of patients by unscrupulous providers which are then autopaid by the insurer.

Note that OIG treats all spending the same, so that $300M spent on Cologuard (under FDA approval and an NCD) is treated the same as $300M spent on 81408 (to pop up labs with no website cited as allegedly fraudulent by DOJ in press releases).   It's all the same in this report. As Becky Winslow remarked on Linked In, "Labs who don't even have the technical ability to perform 81408 have billed and been paid for 81408."

See concise coverage of the OIG report at Genomeweb here.

In Point 2, I noted that the alleged fraudulent claims never occurred MolDx MACs, which devote great resources to genomic payment controls.  However, no payments occurred in the NGS MACs either, which devote de minimis controls (but firm ones) on genetics.