Summary:  This article briefly highlights use of unlisted molecular pathology code 81479 in 2018 versus 2019, with a deep dive into recently-released granular data for 2018.  CMS data is easy to find and review; this blog took less than an hour "A to Z" including finding the cloud data, arranging it in small Excel tables, and writing.

Here, I focus on detailed and easily-manipulated cloud databases released by CMS for CY2018 (here). This data is older than 2019 data, but far easier to use, since it's in cloud databases. 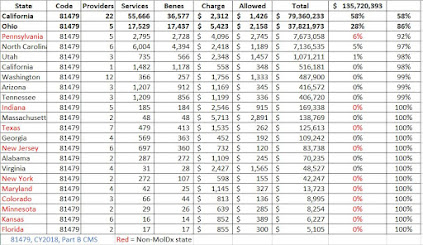 Nearly all 81479 billing in 2018 was in MolDx states - easily discovered in the CMS cloud database for 2018.   This is the same result I got by manually going through each one of the newer 2019 state level Excel files one by one for code 81479.

Below, I chart all of the labs paid at least $100,000 in CY2018 in this Part B data.  Like in the prior table, the few labs outside MolDx states are shown in red.  Click to enlarge. 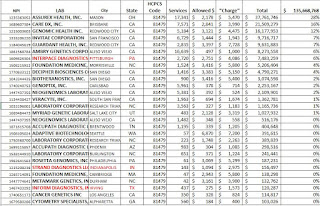 The original spreadsheet data I used is in the cloud here. (FN2)

Caris - Mix of Molecular and Pathology Codes in 2018

Note that a significant percentage of Caris's CMS payments were 88-series codes, or tissue pathology codes rather than 81-series codes for genomics.

Charge to payment ratios are pretty meaningless in Medicare, but sometimes fun to look at.  I sorted for the labs with Charge/Payment ratios at 5 or over (range, 5-12).  Most had less than $10,000 in Medicare payments.  The average payment was  $177.  All were in non-MolDx states.  (E.g., use of 81479 in non-MolDx states is rare, and pays poorly.)

Tennessee  switched from the Cahaba MAC to Palmetto MAC in 2018, but I don't believe MolDx rules were applied until mid-year or later.

This week, Google Drive appears to convert uploaded Excel workbooks into Google Sheets automatically, although my settings tell it not to do that.  (?!)  I believe that if you click Download it will give the option of back-converting to Excel.