Reimbursement is not Inherently Dangerous, but Unforgiving of Neglect

This morning I had the chance to do a 45 minute interview on diagnostics and payers for a class being held at ASU in its diagnostics policy center.

Both the interviewer, Pierre Casseigneul (founding CEO of CareDx) and I have pilot's licenses, though mine's been inactive for quite a while.

The discussion reminded me of a plaque I've had for decades:  Aviation is not inherently dangerous, but it's terribly unforgiving of any carelessness, incapacity, or neglect. 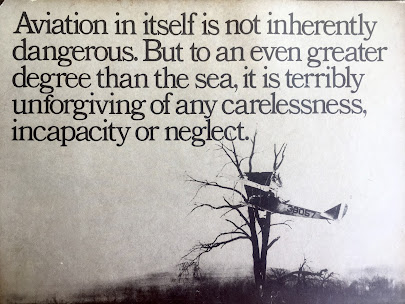 Like aviation, health-tech reimbursement is partly intuitive but our health system is overlaid with very complex, unavoidable, and arcane rules that take a long time to master.   And they are unforgiving of neglect.

And any major mistake can trap a company very fast.

But like aviation, when everything goes right, it can be thrilling!