Regarding Diagnostics, How Confused Were Authors of Medicare's Breakthrough Coverage Proposal?

Nearly two months ago, CMS released a groundbreaking proposal to cover medical devices reviewed under the FDA Breakthrough Pathway for four years, based on the indication for use and the date of FDA approval.  I covered the release here on August 31 and discussed some ins and outs here.

The comment period winds up on Monday, November 2, and there are already 94 comments submitted (here, see "comment' box.)

I'd like to circle back to my remarks, "Ins and Outs, #3" in an earlier blog. I'm still bothered and puzzled by ambiguities in the text, regarding diagnostics.

In German, they have the word "Jein" meaning "ja" and "nein" at once.  Does the Breakthrough Coverage proposal encompass diagnostics?  Jein?  Yes, but with some weird text that raises confusion.

So if the regulation at 405.601, 405.603 is finalized, it applies to the array of medical devices under Breakthrough, and that is well-known to include diagsostics.

NO:  Puzzling CMS Text in Rulemaking

It sure sounds to me like the author of this paragraph thought that, as proposed, diagnostics were NOT included under the rubric "medical devices," but MIGHT be included as an "ADDITIONAL" type of coverage to that which was proposed.  Weirdly, CMS scrambles together a category covered by Breakthrough Devices terminology (diagnostics) and something entirely outside breakthrough device terminology (drugs).

Resolution: Does It Matter?

If the regulation is finalized with the wording proposed, the legal regulation will include diagnostics (as it encompasses all breakthrough devices without qualification.)

However, my concern is, some author or authors at CMS did not want to include diagnostics.  They think of "medical devices" as med/surg devices - pacemakers, artificial hips.  At their most perverse, CMS could state that, "In our original discussion, we clearly indicated to the public that we did not intend to include diagnostics, unless we would be convinced to do so by public comment and data. We referred to diagnostics as an additional category that might be included under MCIT, at our discretion. Therefore, in finalizing the rule, we have edited the regulation to clarify, as we intended, that it does not include diagnostics, bringing the regulatory text into alignment with our public discussion."   I think this would be a pretty unhappy outcome, but I'm not sure it's impossible.

Let's hope this plays out well for diagnostics but re-reading this text for several additional weeks I continue to feel that it's worth paying attention to. 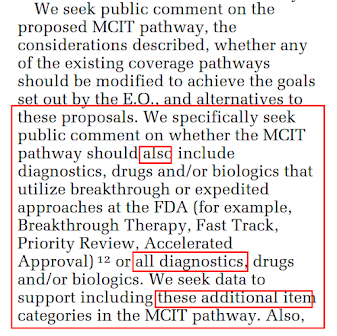 I've seen comments that a phrasing on page 3 of the Federal Register document narrows the rule to medical devices other than diagnostics.  This says, "At this time, we are limiting MCIT to medical devices because that is a category of products explicitly identified by E.O. 13890, and we have identified that breakthrough devices can experience variable coverage across the nation shortly after market authorization."  Unlike some letters I have read, I wouldn't say this sentence excludes diagnostics, which FDA considers clearly includes as "medical devices."   I would say this sentence explains why the MCIT is limited to breakthrough medical devices in general, and CMS didn't write it to include, for example, accelerated approval drugs.

And lest their be any confusion that Medicare had (somewhere, somehow) previously defined "medical devices" as only med-surg devices, it didn't.  The official and manualized Medicare definition of "medical devices" quotes from FDA and explicitly includes diagnostics (here).