A few weeks ago, I noted that Palmetto (which purchased the DEX (TM) Information Exchange last summer) was rebranding the website and making some modifications - here.   The website has been modified on at least two weekends, with rolling changes.

I discussed how the DEX (TM) information could be used and triangulated with other information to identify Medicare overpayments.   Also, the DEX (TM) website has had some pretty open comments:  "The test registry catalog is available for reference and review by other stakeholders in the healthcare system."   The homepage adds, "The Diagnostics Exchange is an open, online test registry and workflow solution for information and evidence about MDx tests."

Several updates added the weekend of September 28, 2020.   The website is now fully rebranded as a Palmetto GBA product.  Palmetto GBA LLC is part of Celerian Group which in turn is under South Carolina BCBS.  The home page refers to both Palmetto GBA (top) and MolDx(R) (bottom). 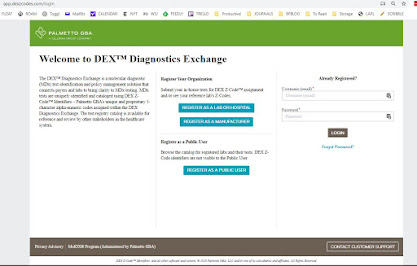 The home page has some of the same text as before, such as: "The test registry catalog is available for reference and review by other stakeholders in the healthcare system."

I noticed quirky behavior in one data field.

For many years, up to 9/28/2020, for each of the 14,000-plus tests listed, there was a field annotating Medicare (Palmetto) coverage or not.  For many of the thousands of tests, this was information not easily extracted from any public LCDs or articles.   For example, you might find that your test ABCD Gene wasn't paid (Status "N") but you competitor's test ABCD Gene was payable (Status "Y"), which you could complain about or further research.   That Y/N coverage field (which I thought always existed for all test entries) currently seems to appear or not, depending on the test.   For example, in the pictures below, the payer/plan/coverage field is there for AltheaDx 2C19 (lab's test ID 1001).   The "coverage" field (the leftmost tab at the bottom of a test webshot) is absent for one VKOR test but present for another version of a VKOR test from the same source. 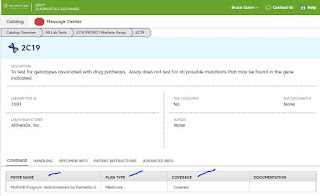 Cover Field Absent for a VKOR: Coverage field back again for another VKOR version by same vender: 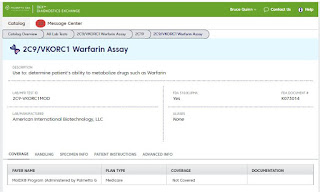 Many of the fields appear to pull from the MolDx Master Edit File, which I've received from time to time via FOIA (Federal Freedom of Information Act).  I did a rough comparison and found about 4.9MB of data fields in the public website DEX (TM) that match data fields in the larger 5.9MB MEF.  From time to time I've reported pricing errors I've found in these sources, when they are clear-cut, to MolDx and CMS.
Nerd Note
Medicare Advantage plans may reach 51% of Medicare enrollees within ten years (here).   Medicare Advantage plans are required to cover "written coverage decisions" of MACs; the text does not refer to LCDs but "written" decisions.  Here (section 90).   Since the DEX (TM) website is branded Palmetto GBA and also branded MOLDX (R), do the coverage statements (as clipped above) become binding on Medicare Advantage plans?  Or, do the "noncoverage" fields in the DEX (TM) for some entries play to the advantage of Medicare Advantage plans?   Or, do only statements on the Palmetto "MAC" websites (JM, JJ, etc) matter?   I'm not sure.