As reported by Politico on May 24, 2019, the administration has released rulemaking that will role back what is framed as an error of legal interpretation in prior HHS regulations.

Regarding transgender issues, the new proposed rule states that in the old May 2016 final rule: " the Department defined discrimination “on the basis of sex” to cover, among other things, discrimination on the basis of sex stereotyping [and] gender identity..."    The May 2016 rule covered additional areas such as multi-lingual services (where most of the regulatory costs lie).

The rule covers litigation history (including Franciscan Alliance).  The rule notes that on April 5, 2019, DOJ filed a brief stating that "Since the 1557 rules was issued, the United States has returned to its longstanding position that the term 'sex' in Title VII does not refer to gender identity, and there is no reason why Section 1557, which incorporates [analogous prohibition] should be treated differently."  HHS notes that the proposed rule being released now in May 2019 would bring HHS regulations into line with the position taken in court by DOJ in April 2019.  In contrast, the 2016 final rule "created confusion regarding Title IX's definition of discrimination on the basis of sex."

Total savings due to decreased regulatory burden are estimated at $3.5B over 5 years (page 124). 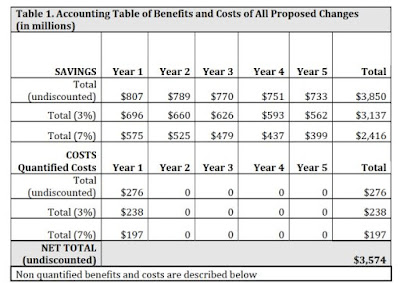 The new rule posits $3.5B in 5-year savings whereas the original rule projected only $1B in 5-year costs.  The new rule cites a range of resources for which HHS says it had previously severely underestimated costs (p. 122-123).

For an October 2018 NYT article on Title IX, here.

For a concurrent discussion of CDC and LGBT issues, here.