Over the past several years, states that impose the death penalty by lethal injection have frequently had difficulty obtaining drugs through commercial pathways. 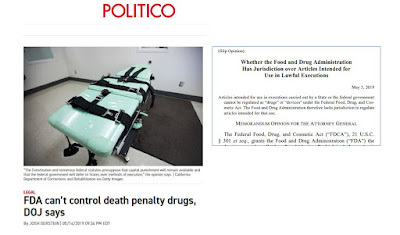 The article has a quite interesting entry point.  It opens by noting that the FDA has authority regulate "drugs and devices...other than food...intended to affect the structure or any function of the body."   However, FDA has not regulated electric chairs and firearms for firing squads - which are devices tht do "affect the structure or function of the body."   However, of course, it does regulate drugs, and it is drugs which come into the question of lethal injection executions.

Although the new legal brief distinguishes its approach, there was a related FDA Supreme Court case brought by opponents of the death penalty in 1985, Heckler v Cheney, pdf of that case here.  In addition, following decisions Beaty and Cook, there is an injunction based on FDA law prohibiting importation of sodium thiopental into the US (it is not manufactured in the US), for any purpose.  (Refs. inside new DOJ brief, p. 7).

In one of many examples, DOJ points out that pesticides impact the human body as defined under FDA law, but are clearly meant to be regulated only under another body of law (federal insecticide act, FIFRA).

In an interview at CNBC health conference "Healthy Returns," May 22, 2019, Scott Gottlieb discussed this DOJ document.  But he also noted that FDA was under a current active injunction requiring it to forbid importation of execution drugs.   Therefore, DOJ would have to take this new memo, go back to the injunction court, get the injunction lifted (so that FDA could "stop" forbidding importation of execution drugs), which itself would get appealed by various parties up to the Supreme Court over four years.