Very very brief blog...This week, there is a Theranos documentary on ABC and another on HBO.  Here.

The HBO documentary is also getting a theatrical run in Los Angeles.   Typically, a week or two in theaters is the minimum for potential nomination for Academy Awards.

For a discussion in LA Times, here.

INVENTOR opens in New York as well, on Friday March 22 at Cinema Village.

One of the documentaries - either the ABC one or the HBO one - comments that in 2014 or 2015 Theranos' asserted its revenue was "$1 billion."  That total would be very unlikely, if your public Medicare lab revenue was $10,000-$100,000.  And finding your public Medicare revenue doesn't take a Pulitzer level journalist or the world's smartest investor.   Would have been a fine moment if Holmes on stage had been asked how her all-payer lab revenue could be "$1B" if her CMS revenue was $10,000.  See CMS files in Excel, here. 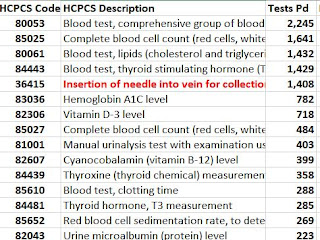 Although CMS paid for about 14,000 total tests, none were the herpes test that was the only FDA cleared test on the Edison.


Neither Holmes nor Balwani appeared to be excluded from Medicare as of 3/2019 (here). 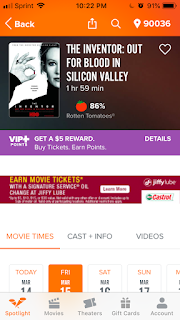 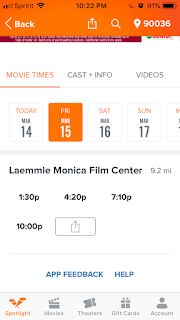 THE INVENTOR had a favorable, front-page review on the Los Angeles Times entertainment section for  Friday March 15.    "A Fraudulent Tech Wizard's Fall."  That said, it's playing in one fifty-seat fourplex, and I saw in an audience of 8. 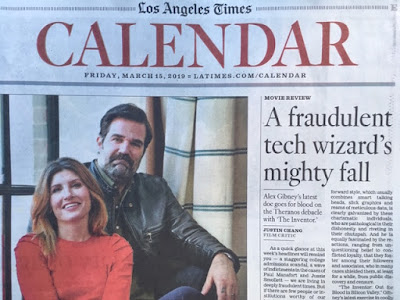 What I extracted from the documentaries was that there were three independent problems at Theranos.  (1) The Edison device didn't work.   (2) Separate from that, when they started running an industry platform based CLIA lab for clin chem, they couldn't do it right.   (3) Separate from that, they allegedly claimed to investors their revenue was very high - hundreds of millions or a billion, if I remember correctly from the documentaries and SEC and investor lawsuit news stories - when it wasn't.  Even without the first two problems, that independent third problem would have caught up with them very badly as soon as they required funding with more closely audited financials or an IPO with back-year financials.