Here, I'm providing by PDF a 25-page white paper on how the March 2018 CMS NCD for Foundation Medicine turned into a wave of concern among oncology stakeholders in early 2019.

Find the white paper in the cloud here. 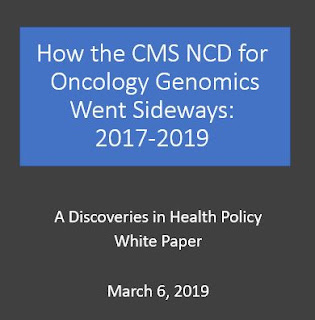 I've clipped the introductory section below the break.

This is the story of an unusual chapter in Medicare’s evolving policy structure for genomic medicine.   A remarkable entry point occurs in January 2019, when some 60 major organizations, including ACO and the Personalized Medicine Coalition, warning of “significant policy overreach” and “unintended consequences.”   What happened?

The process started in November 2017, when CMS proposed to cover the Foundation Medicine F1 test, which measures over 300 tumor genes and was newly FDA-approved.  At the same time, CMS proposed to non-cover all lab-developed tests (even in cases where no FDA-approved test existed).   Extensive and urgent feedback to CMS, even in the form of a Wall Street Journal editorial, led to a revised final coverage policy in March 2018.

That final policy covered FDA-approved gene panel tests in patients with advanced cancer, when next-generation sequencing technology was used.  NGS-based tests outside of FDA labeling could be covered by local CMS contractors.   Most policyholders moved on, while labs and manufacturers accelerated efforts to obtain FDA test approvals, due to the guarantee of CMS coverage that would follow.

The road turns.  In November 2018, CMS issued instructions to its contractors that clarified its intention that NGS tests were “non-covered” in all cancer patients who did not have advanced cancer.   This withdrew coverage, since nationwide local MACs cover NGS testing, like testing by other sequencing techniques, in likely hereditary breast and colon cancer.

In January 2019, the Palmetto contractor and other contractors in the MolDx policy consortium revised their BRCA-testing LCDs by reference to the NCD – apparently canceling BRCA testing coverage if the patient had stage 1-2 cancer and if the method was NGS.

Why does it make sense to block one benchtop method of DNA sequencing, but cover others, for the same gene, and for same medical history, in exactly the same patient?  Or – does it make no sense at all.

Is this an unintended consequence?   For example, did CMS really intend to block approaches to molecular microbiology in cancer patients, asking the hospital microbiology lab to confirm before reporting the test that they have metastatic cancer?   If you’ve had a cured stage 1-2 cancer in the past, for how many years into the future are you blocked from NGS testing of any type?  What happened to new statements added for the final NCD that verbally restrict its scope not to all NGS tests, but only to those for targeted drugs (e.g. the Foundation test)?

And most of all - what will happen next?