CMS Announces It Will Soon Issue "Reopening" of Next-Gen NCD

From November 2018-February 2019, an unexpected series of events began with a CMS transmittal of the NCD that inserted a new text sections which raised alarm that the NCD will be interpreted to block NGS-method (but not other methods) of BRCA and other germline testing.  This would apply to all Medicare patients, regardless of age.   For a protest letter signed by about 60 clinical organizations in January 2019, here.


What Does This Mean?

CMS New Action #1
In my understanding, CMS could issue a revised NCD directly, allowing 30 days of public comment before finalization.   For example, CMS could redline the text to confirm the overriding effect of existing sentences "buried" in the NCD's body that state it applies only to tumor testing, not germline testing.

CMS New Action #2
Alternatively, and I believe more likely, CMS could simply issue a statement that the NCD is being "reopened," much like a request for information.

Through this "reopening," CMS could request public comment on the best ways to modify the existing NCD.   Such a comment period would run for 30 days, after which, in some period of weeks or longer, CMS could issue a proposed NCD, take another 30 days of comment, then finalize it.

CMS is unlikely to make any "retroactive" changes to the NCD, which by law is effective the date is was released one year ago.

If the NCD is interpreted to "ban" NGS BRCA or other NGS testing in stage 1-2 cancer patients, then potentially CMS could seek recoupments.  But given the messy situation, it's unlikely that CMS itself would try this.

Some other entity could seek recoupments (such as a for-profit Recovery Audit Contractor or for-profit qui tam case).  In my personal opinion this would likely fail sooner or later, as the NCD contains clear, mutually contradictory statements about its own scope.    Like Schroedinger's Cat, the NCD taken as a whole currently blocks and allows germline testing by NGS at the same time.

For a detailed white paper on the saga since 2017, see here.

For the white paper, a chart that compares how CMS met statutory NCD requirements for analysis and justification of its position on tumor testing versus the failure to meet any of these requirements regarding germline testing: 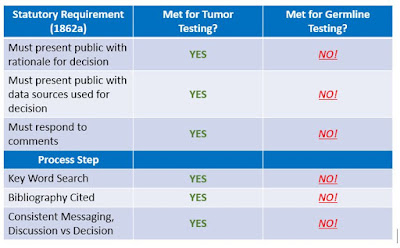