I live in California but frequently work in Washington which gives me a lot of coast-to-coast flights.  In August I had the chance to read two complementary books on business strategy.  These were "Reinvent Your Business Model," a new edition of Mark Johnson's "Seizing the White Space;" and "LEAP, How To Thrive in a World Where Everything Can Be Copied," by Swiss B-school guru Howard Yu. 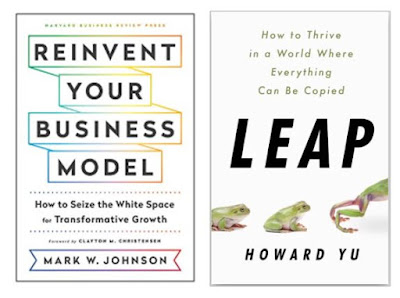 Both deal with innovation in a world where the competition comes every closer and the bar moves ever higher.

Below, I highlight some points from each book and then show a Medtech Take-Away Lesson for each.

"Reinvent" describes a world where a company's core business will also be prey to competitors and it needs to constant upgrade its game or move into "adjacent markets," e.g. white spaces that require innovative twists to exploit.  Often, a white space is less competitive but requires altering one's business model.   For example, the iPod moved into a white space when Apple created the ITunes store, which was a wholly new service model for Apple, a desktop and laptop manufacturer at the time.   What Apple learned from ITunes applied forward to its iPad/iPhone App Store, and the rest is history.   Johnson focuses on the challenge of seeing such "white spaces" and exploiting the old core competence while adding the new one.

Medtech Tie-In:  It occurred that most offerings in medtech and diagnostics also try to answer these three questions - we call it an unmet medical need, and improved clinical outcome - and Johnson's three questions capture medtech innovation as well.  (Note that you can't conclude, "if you build it, they will come.")

Medtech Tie-In #2:  In medtech, we have a weird mix of multiple disparate customers to satisfy - physicians, hospital purchasing staff, patients, health technology assessors, payers.  While working within the confines of a legacy and largely fixed payment system. More on that, in the next section.

LEAP talks about the history of Proctor and Gamble.  In the 1870s/1880s, it led industrial approaches to making consumer products like soap in giant factories, far above the scale of small business.   By the 1890s, Proctor and Gamble pioneered what we would today call focus groups and effective advertising.    In the 1920s, Proctor and Gamble pioneered bringing more advanced chemistry into the design of household products (something the pharma industry had just discovered in the past decade or two).   This led to Dreft soap in 1935, and Tide in 1946, both landmark product introductions.   Yu's point is that a (1) new type of industrialization, (2) a wholly new school of advertising built on focus groups, and (3) a new approach to consumer soap chemistry were three different core competencies that one company, P&G, was able to roll into over several decades and far ahead of any competitors.

Yu also makes the point that as time rolls on, today's cutting edge becomes tomorrow's commodity as competitors enter and as patents or other thought capital expire or diffuse.  Yu describes three fundamental zones of competition and differentiation:
Product differentiation is obvious; new bells and whistles, faster-lighter, and so on.   Services differentiation can be key: for example, repairing your equipment twice as fast as the competition can repair theirs.   Business model differentiation could be, for example, sell versus lease, or "razor and blades" models or other ways of solving the business interface to your customer.  (Johnson, in Reinvent, presents business model differentiation as the secret sauce that is most often ignored or missed).

Medtech Tie-In:  Yu implies that other industries get faster, better, and cheaper as they roll through multiple cycles of (A) product, (B) services, and (C) business model differentiation.

In Medtech, what do we always hear?   Don't, for god's sake, try to change physician practice or the way the system finances work (CPT codes, DRGs, and so on).

We make it so difficult to change physician practice, or the way specialties are set up, or the way that forty-year-old codes and payment systems work, that we make many forms of innovation into a forbidden territory, or at least, about as inviting as an icy steep mountainside.

The issue of complexity of our healthcare administration system is discussed in a new 2018 book by Etienne Deffarges, "Untangling the USA," here.