staff reporter
NEW YORK (GenomeWeb) – Myriad Genetics recently received a subpoena from the US Department of Health and Human Services, Office of Inspector General, related to "an investigation into possible false or otherwise improper claims submitted for payment under Medicare and Medicaid," the company said in a regulatory document.
According to a Form 8-K filed on Monday by the company with the US Securities and Exchange Commission, the OIG subpoenaed Myriad for documents related to its billing of government-funded healthcare programs for its hereditary cancer tests. The subpoena covers a period starting Jan. 1, 2014, through the date when the subpoena was issued. Myriad launched its 25-gene myRisk Hereditary Cancer test in September 2013.
Myriad said in the SEC document that it is cooperating with the government’s request and responding to the subpoena. At this time, no claims have been made against Myriad.
___
Myriad payments from Medicare are open public record, but Medicaid payments are not.  CY2014 CMS payments are here, CY2015 CMS payments are here.   CY2016 CMS payments have been released by state; they will be released about May/June 2018 by lab or doctor.

Cloud spreadsheets here 2014 and here 2015.
I've previously noted (October 2017) that there seems to be a 2015-2017 edit blocking use of 81211-81213 together unless a special medical circumstance dictates that use of a -59 modifier is appropriate.  CMS reiterated the same 81211/81213 edit in December 2017 for CY2018, here.  As a retired former medical director, and consultant giving advice to other labs about how CCI edits work and are enforced, I was puzzled how Noridian was handling the intersection of the 81211/81213 payments in light of the CCI edit; see Noridian's response here.  CMS guidance on when - and when not - to use Modifier 59, here.  Article by OIG authors on Modifier 59, here.
MYGN Update (3/13)

In a commentary at a Cowen and Company conference, early on March 13, 2018, [audio archived in cloud], CEO Mark Capone briefly commented on the subpoena, noting that Medicare was only 7% of Myriad revenue and that doctors typically currently order Integrated BRACAnalysis and MyRisk, the former of which is processed in a Sanger laboratory and with a large DupDel platform BART, and the latter in a separate NGS laboratory.  MyRisk was undergoing MAC contractor review and finds substantial mutations not found in BRCA analysis alone.   Currently billing is via 81162. 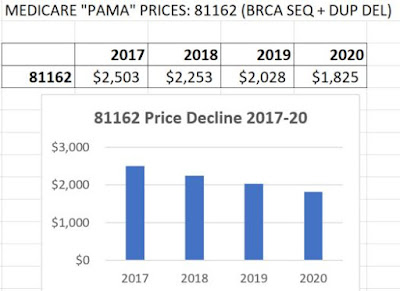 Details of a February 9-10 AMA CPT meeting are confidential to participants and observers of the meeting.  However, AMA posts a brief public notice of the results on its website.  Revisions to the BRCA code set were determined and would normally appear in the 2019 code book.  In its public notice, AMA refers to "deletion of 81211, 81213, 81214." 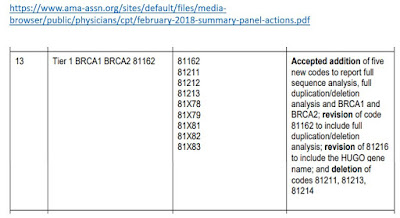 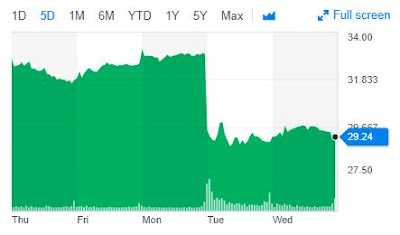