Update - CMS released the Final NCD on March 16, 2018, with revisions that met most of the concerns raised by the WSJ author and others.   See Final NCD here.

Update: On Tuesday, March 6, about a week after the original  completion date, CMS updated its website to give a new expected completion date of March 16.   The rest of this original blog stands as written, below.
________

On November 30, as part of its joint review with the FDA of the Foundation One CDx test, CMS released a wide-ranging NCD with implications for all Medicare patients with a early or late stage cancers.    The normal 30-day comment period was extended from December 28 to January 17, because FDA didn't release its evaluation and review of the FMI test until just before Christmas.

As of early March [Until March 6], CMS was still posting that the NCD completion date would be February 28:

But CMS didn't release the finalized NCD.  What happened?

All signals are that the NCD was probably finished and ready for release on time, on February 28.  CMS took no opportunity to revise the release date, as it had when it publicly posted a revised comment period date.   It's likely that something intervened - the Weill-Cornell Op Ed in the WSJ on February 25.   Here's a screenshot: 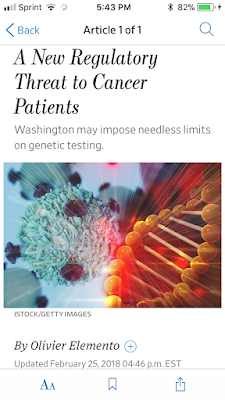 This Op Ed hits the right key words - "needless limits," and "regulatory threat," etc.   And consider where this lands.  On Monday morning, this Op Ed was on the breakfast tables of senior health staff for Senator McConnell, Senator Hatch, Senator Schumer, Senator Feinstein, and so forth.   Lots of retirees also saw it early in the morning.  Staffers at the White House and OMB saw it, many of which had no clue what was being discussed.

What will happen next?

What will happen next will depend on whether the "pull the brake" moment resulted in a short extra review at higher levels, which could lead to a delay of a couple days in the finished document, or whether enough confusion is raised to lead CMS to release the document on a new deadline of March 16, perhaps with new revisions.

Analysis.  Most higher-ups could probably be calmed down by explanations by medical staff (e.g. mid level staff) that the NCD was correctly drafted, wisely revised, and ready to go.   Since higher level staff probably won't have new articulate questions of their own, the extra review (for better or worse) would probably not be very long nor result in document changes.   Still, I'd look for CMS to release the NCD on a Friday evening at 5 or 6 pm - thus arguing for Friday March 9 or Friday March 16, even if it's ready to go on March 5.
___