In 2013, revised 2014, Harvard Business School produced a case study of Claritas Genomics (by Robert F. Higgins) which is a great profile of challenges facing independent genomics lab.  Claritas was spun out from Boston Children's Hospital.

On January 19, 2018, Genomeweb ran an article that the lab was closing its doors.  The advanced genomics independent lab environment is difficult, including now very large publicly funded companies as well as perhaps more competition from academic medical centers whose sequencing abilities may be synergized by less costly NGS platforms and outsourced pipeline software from a range of digital genomics companies (e.g. Edico, Fabric Genomics, others.)   In addition the payer environment is hard; an executive left Hudson Alpha recently reporting "the reimbursement is just not there."

Some recent spinout labs, like NAVICAN from Intermountain, seem to be aiming to have extensive constellations of services such as telehealth genetic counselors, virtual tumor boards, etc, "more than just a genomic test."   In a recent paper I called this "Lab 3.0."

The founding CEO of Claritas, Patrice Milos, moved a couple years ago to Medley Genomics, a company where several of the co-founders are full time computer science professors. 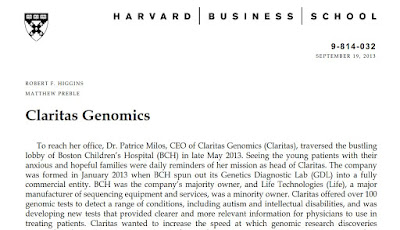 Update - A February 9, 2018 article in Genomeweb states that Claritas assets have been purchased b y "Drug discovery startup Q-State Biosciences," here.  The next phase will involve WuXi NextCode, which was also an investor in the original Claritas.  More about WuXi NextCode here in SCMP, South China Morning Post.

___
Harvard Case Studies are available as PDFs for about $5.