According to multiple news reports on May 24, SEC has filed against an insider-trading scheme driven by CMS information leaks to a consultant for hedge funds.   The alleged actions in the case date back to 2012/2013. 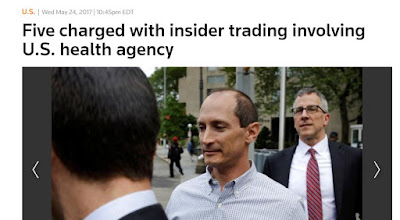 Public information on the case is not new, with news stories dating at least to October 2014 (WSJ 2014 here.  Reuters 2014 here.)  According to MedCity News, one individual, Fogel, has pled guilty and is cooperating with prosecutors.

A wide-ranging U.S. probe into under-the-radar information links between Washington and Wall Street snared three hedge fund executives, a D.C. consultant and a government employee, who are accused of profiting off inside information about changes in health-care regulations.
The prosecution takes aim at the political intelligence industry in Washington, in which consultants -- often former government employees themselves -- nurture ex-colleagues for information about potentially market-moving decisions, and relay that to hedge fund traders and others in exchange for lucrative consulting fees.
That’s what prosecutors in Manhattan accused three partners at Deerfield Management, a Centers for Medicare and Medicaid Services employee and David Blaszczak, a former CMS worker with his own D.C. consulting firm, of doing.

The MedCity News article says that "CMS declined to state" if Worrall continues to work at the agency, but he seems to be absent from the online CMS employee directory (here). 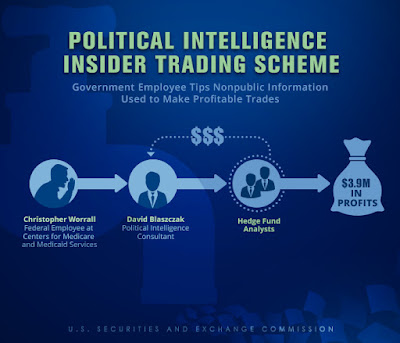