Brief Blog: CMS MACs by Jurisdiction and by Contractor

CMS provides a website with detailed information on its Medicare Administrative Contractors (MACs) for traditional fee for service Parts A and B.   The website is here.

I recently needed to consolidate the information for a project, and provide the Excel spreadsheet in the cloud, here.  Dates and figures are current as of April 2017.

A snapshot summary is below - click to enlarge.   There are four numbered MACs (the old system), and eight lettered MACs, so there are twelve contracts.  However, four MACs (Novitas, NGS, Noridian, WPS) hold two contracts, so there are only eight MAC companies.

While I do not understand the full corporate structures, I believe that two pairs of MACs have some type of higher level joint ownership or umbrella corporation (Palmetto, CGS; and Novitas, FCSO).*  This would leave six MACs or sets of MACs that are unrelated. 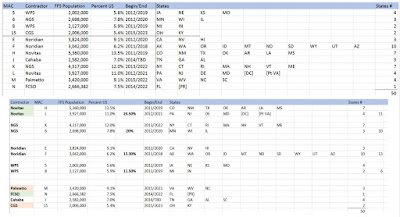 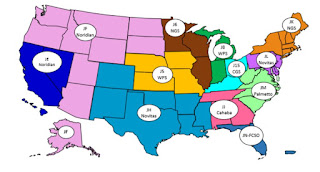 For economics nerds, the MACs have a Herfindahl or oligopoly index of 0.15.  The Herfindahl  index varies from 0 to 1, with 1 representing monopoly.  It is mostly driven by at least one company having a very large share (e.g. 1 company has 70% or 80%).  (Calculated by summing the squares of each participant's market share.)    Wikipedia.