On January 13, CMS used a rarely-invoked administrative procedure to overturn its past decisions, and allow coverage of certain CGM's.   As a result, Dexcom's market value popped upward by 25%, about $1.5B, in minutes. 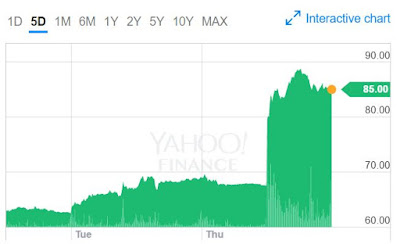 Earlier this year, I covered and posted an obscure Departmental Appeals Board ruling that was probably pivotal in collapsing the logical structure of the agency's objections to coverage (here).  In January 2017, a favorable RCT appeared in NEJM, along with an op ed (here, here).

The new change is decisive and appears in the form of an Administrator's Ruling, rather than an NCD, LCD, or other program instruction.   In addition, the sixteen-page Ruling is essentially a mini-course in the legal and policy mechanisms of DME decisions (here).

The ruling holds that CGM, when FDA-labeled for insulin dosing based on their readouts, are DME.   They meet and exceed the hurdle that they are primarily for a medical use.   Unfortunately, in the last sentences of the decision, the ruling holds that CGM that guide necessary glucose testing, but are not themselves FDA-labeled for dosing decisions, are not DME.  I think this closing sentence, not justified by the prior dozen pages of text and reasoning, is in error and is capricious, because it is unjustified in the body of the document.

The ruling determines that the Dexcom G5 "is DME," but leaves it to coverage decisions in LCDs or NCDs to confirm that it is medically necessary DME.

More after the break.
In the News

How Medicare Benefits Are Defined

Medicare has longstanding coverage for "durable medical equipment," found in Social Security Act §1861(n).  1861 is pivotal to the operation of Medicare law.  For example, one section establishes that Medicare covers "medical and other health services" and it is here, at 1861(s) that there is a lengthy and multi-section definition of what "medical and other health services" means.  For example, "physicians' services" are defined simply by listing those words (no separate calling-out of surgical services, office visits, etc.).    Diagnostic tests are defined as "diagnostic x-ray tests, diagnostic laboratory tests, and other diagnostic tests," and this old language is flexible enough to cover everything from endoscopy to gene panels to PET scans.

DME is listed as a "medical and health benefit" by listing the three words "durable medical equipment" at 1861(s)(6), while the meaning of the term DME is defined earlier at 1861(n), as: "DME includ[ing] iron lungs, oxygen tents, and wheelchairs used in the patient's home, whether rental or purchased, and including blood-testing strips and blood glucose monitors."

In separate regulations, 42 CFR 414.202, Medicare defines what "durable" means and the the equipment must inclusively have a primarily medical purpose, not be useful to persons without the relevant medical condition, and be durable e.g. 3-5 years, in particular, the key functional part must be durable.  (A disposable device that fits in a durable metal shell is not DME because a mere shell is not the key functional part.)

As I discussed in a July 2016 blog, CMS has locked down in recent years in language of forgotten origin which denied payment for CGM because it is "preventive" and a few other equally odd reasons (here).  This language appeared here and there in the program but was never dignified by inclusion in a single major LCD or NCD.   One rationale was that results of a CGM were, per FDA, to be validated by a strip test when the CGM indicated that the glucose was steering too high or too low.

But by 2015/2016, higher and higher levels of judicial review were framing CMS's policy position as just nonsensical (see July blog).  This was well before FDA approval of a dosing-capable CGM.

Last summer, an FDA advisory panel supporting use of the newest Dexcom CGM, the G5, for dosing in diabetes (here; also at Diatribe, here), a decision which was finalized by the FDA on December 20, 2016 (here; coverage at Diatribe, here).

What Is An Administrator's Ruling?

The Administrator's Ruling is a rarely-used process which states an agency position - on any topic - which is to be followed by internal CMS staff, administrative law judges, and MACs and audit programs.   They are "final opinions of the agency" on "clarification and interpretation of complex or ambiguous provisions of law."

These rulings are uncommon, with only 19 rulings issued in the 22 years since 1995.  Sometimes two or three appear in a year and then there is a gap of several years.   They may deal with relative trivia, or with implementing a major court decision, or with a final resolution to some eye-crossing policy dilemma that has batted around the agency for a few years.   For example, one 2011 ruling applied to hospice audits and the way patients were counted (here).   A 2006 ruling gives policy for organ donor cost allocations (here).  A 1996 ruling clarified "the distinction between the statutory benefits of 'orthotics' and 'DME.')   My personal favorite, in 2005, clarified that CMS does not pay for adjustable lenses after cataract surgery, but can pay for the part or functionality that is fixed-focus (here).  This was related to the statutory coverage of a post-cataract lens but the non-coverage of procedures to correct vision refraction problems.

Rulings are now given sequential numbering along with public regulations.  For example, the November 2016 final outpatient rule for CY2017 was CMS-1656-FC and the CGM Ruling is CMS-1682-R.

The ruling is based on the definition of DME at SSA 1861(n) and the CMS regulatory detail and amplification at 42 CFR 414.202.   In 1997, SSA 1861(n) was modified to include coverage of glucose strips and BGMs without regard to Type 1 or Type 2 diabetes status.

While there is an NCD for BGM, dating to before 1988, it doesn't say very much, defining BGM and saying it is for patients "with diabetes" and the patient or responsible individual  have been "appropriately trained."  According to the NCD's footnotes, before 1995, a Medicare patient had to not only be diabetic and insulin-dependent, but be in "poor diabetic control," to get strips.

CGM are defined as having a subcutaneous sensor (replaced q7d) that reads interstitial (not blood) glucose, and a transmitter and receiver/monitor.   CMS maintains its view that CGMs that "complement, not replace" blood glucose monitors.  CMS defines all such existing CGM as "non-therapeutic CGMs."    (In my opinion, this stance, which maintains unity with past decisions that have been thrown out by judges, is not necessary and makes little sense.)   However, CMS acknowledges that "one CGM product" has been FDA-approved for direct use in insulin dosing management.

The Ruling then walks through the five hallmarks of a DME device at 42 CFR 414.202, being:
The Ruling works through these from page 8 to page 11 and finds the Dexcom CGM meets all five criteria.   They reason (it isn't hard) that the Dexcom CGM meets Reason 3.   They do not provide a ruling or justification that an earlier monitoring (non-insulin-dosing)  CGM fails to meet Criteria 3.  CMS states that the ruling is about the dosing CGM, and does not address any other product classification or coverage issue.   It then states that implementation may be through NCD, LCD, or other means.   That is, the product is DME because it is durable and it has a primarily medical purpose; it may or may not be medically necessary for diabetic patients, as far as this ruling extends.


On its last page, the Ruling suddenly loops back to the issue of regular older CGM models.  At page 14, in the last paragraph, the rulding states, "In all other cases in which a CGM does not replace a BGM for making treatment decisions, a CGM is not considered DME."

This is a fiat statement at the very end and not reflected clearly in any earlier argument or reasoning.  I think it is a mistake because the Ruling doesn't explain or justify why using a CGM to know you must quickly make an unexpected, otherwise unknown, and medically important glucose check is "not a medical purpose."  For example, we use stool occult blood tests to look for colon cancer, but they must be followed by another test, a colonoscopy, to be definitive.  Chest pain patients may get an EKG or isotope scan or treadmill test to rule-in if they need a cardiac cath, and so on.   A patient with a unilateral headache may get a CT suggestive of brain tumor, which is tested by a biopsy procedure and test.  The fact that one test leads to another does not make the first test automatically non-payable as "adjunctive" to the second test.

In addition, prior generation devices, like Dexcom's own G4, have the same durability, and are FDA approved as a PMA device, and require physician prescription, and are indicated "to detect hyperglycemia and hypoglycemia, facilitating both acute and long term therapy adjustments" - something hardly needed by a person without an illness or condition.   [If this were a video, rather than a blog, at this point I'd be waving my arms and sputtering like Lewis Black.]  That is, good lord, a description of a durable medical device, even if one wanted to argue (elsewhere, in an LCD or NCD) whether it is medically necessary.

From page 11 forward, the Ruling then walks through pricing rules for DME (including a description of some of the bizarre rules of DME pricing), and issues a price for the Dexcom CGM.   The result is that CGM are to be viewed as a replacement for BGM, and, the rate today is to be calculated by the 1986 rates for BGM, updated by inflation and inclusive of some special rules for price updates for PMA devices.  This results in a 2017 price of $236-277, probably varying by state.

(Note that the 1986 prices for BGM are considerably higher than today's CMS price list for a regular BGM [*], and this is related to some cumbersome rulemaking in December 2002 when CMS believed its own pricelists for BGM were so far above market prices as to be "inherently unreasonable," here.  In other words, Dexcom is lucky that CMS pegs device pricing to 1986 prices, rather than 2017 prices, for the BGM that the G5 will function to replace.  ....There are some other special rules for diabetes strip pricing law and the diabetes product pricing issue was revisited in 2012 under inherent reasonableness law as well, here.)

CMS prices the accessories for monthly use of a Dexcom CMS at a bundled price of $248.38, based on inputs, invoices, and reasoning at page 13.