For some years I've made the observation - from my view as a health MBA rather than a health MPH - that most American health economics focuses on the big picture from a public health policy perspective ("We spend $3T on healthcare, but should spend $2T") and not the actual cash flows and economic strategies and as a result, policy responses often don't match problems.  The problem and the response sail past each other at a ninety degree angle, without touching.

Through a chain of coincidences, I ran across a fascinating book on public transit that I would daringly propose should be required reading in health programs.   The book is "Human Transit: How Clearer Thinking about Public Transit Can Enrich Our Communities and Our Lives" (2011; at Amazon; ebook, paperback, or hardcover.)   More on the chain of coincidences and the book's author, see footnote. [*]

Healthcare is too complex too get in our heads at once.  It's business and it's suffering; it's a public service and it's private; it's medical technology and it's human nature; it's incredibly biologically complex or it's natural (walk more); it spans birth to death and spans every square foot of the nation where a person lives; it's the miracle cure and the wasted billions; it's the creation and coordination of a vast range of personnel and resources; it encompasses the mundane and the tragic; it's the local nurse practitioner and it's also the global pharma or the $31B NIH; and it's the political football that the other guy always throws completely wrong.

Public transit is also complex and also contains dilemmas and conundrums and equations you can't solve at the same time.  Its challenges will never but solved but will always offer new ideas.  Walker has thought long and hard about transit systems and while he remarks, "the principles of transit planning are simple enough that no one needs a graduate degree to understand them," Walker brings a wonderful skill of seeing, assessing, visualizing, condensing, and teaching.  Walker has years of experience with people and problem solving and has worked worldwide.  His book unfolds issues in transit services into riddles, math problems, brain teasers, and conundrums which lead the reader into a new perspective on the moving environment around you, for everyone who lives in a city and who travels to new ones.

Like healthcare, public transit tries to accomplish its goals with finite resources.  Transit has conflicting goals; wide coverage, frequent passages, wide tax support used by a more narrow public segment, high fixed costs and competing needs.  Walker's insightful learnings and creative thinking unveil many principles, options, and facts not easily seen.   A fixed supply of resources has to deal with unexpected demands and that swarming of individuals from countless starting points to countless endpoints - this is similar to the variety of problems a fixed health center faces.   There are questions and options for distributing taxes, fares and other costs (think ACOs, copays, self pay, and bundling).  There are uniform (grid) routes versus radial ones versus serpentine ones; think "guideline based healthcare" rules versus "creative personalization" to the unique patient.  Health systems are facing the challenges and opportunities of digital health.  Transit systems ask how to respond to new innovations like Uber.

Here is my point:  Just like learning chess, or taking geometry, is supposed to teach us about symbolic problem solving in general, Human Transit is a learner's manual and toolkit for thinking about complicated public welfare issues and the ways that dilemmas can be recognized, tamed and approached.   It's like facing the rules of a fishbowl before facing the ecology of the Amazon rainforest, but this understates how interesting the book is.

Going from the smaller to the larger can be a successful teaching method.  In 2008, there was a study that art appreciation - seeing and discussing a painting - could help medical students succeed with subtle observation and be able to conduct more successful physical exams (here), although a painting and a patient are unrelated objects.   While a transit system and a healthcare system are very different objects, I think that reading through a lucid and creative analysis of the first can help you see the other with new eyes.

Another Analogy.  For a Canadian book on health reform: How Hockey Can Save Healthcare, here.

I was in Barcelona for a genomics conference.  Barcelona has a historic core, the Gothic Quarter (like Georgetown in DC or Beacon Hill in Boston), with a large urban area around it, designed in the 1860s, called the Eixample or Extension (rather like Back Bay in Boston, or the birds-eye map of DC).

It turns out the Eixample was designed by an an engineer turned polymath, Ildefons Cerda', who also wrote a 1500-page book on principles of urban design and another book on the conditions of the crowded poor in the Gothic Quarter.  Eixample has a unique layout of square blocks - I can't think of a similar city - with hundreds of octagonal intersections which extend over about 1 x 2 miles.  (See here and here).  The blocks are laid out at perfect NW/SE and NE/SW angles, which was a Spanish design to encourage better sunlight (downtown LA is also laid out at a 45 angle to N/S).   This layout is typically hidden in all Barcelona maps, which treat the coast as an east-west line.  Every street intersection in Eixample is an octagonal zone.

Public transit.  Even though the Eixample is laid out on a grid, Barcelona has many eccentric and confusing bus routes (like Paris or London).  But I saw from bus stop maps that there is a separate, overlaid bus route system of rational orthogonal buses (H routes for N-S and V routes for E-W).  I ran across a blog on exactly this topic (here), which was written only a week before I arrived in Barcelona.

The Barcelona bus map blog author is Jarrett Walker, a well known full time international public transit consultant who also has a separate business website (here).  A few days later, I read his fascinating book "Human Transit" as an ebook on an Ipad, leading to the blog shown above.

Walker's first career was to get a PhD in literature from Stanford (where I did my BS/MD) and he lives in Portland, OR, a city that I really enjoyed living in during 1986. 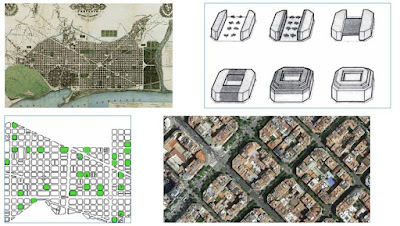 Unexpectedly, my stay in Barcelona coincided with an event called Quinta Diada, which brought 500,000 marchers to the city to protest domination by Spain and ask for a free and independent Catalonia.  There's a story there that springs from the urban map of the city.  The old city was the Gothic Quarter or Barrio Gotico, surrounded by a city wall; and an extension to its west, El Raval, which had its own city wall.  But surprisingly, these city walls didn't date, at least not entirely, to the middle ages; they were put up after Catalonia lost a battle with Spain around 1710, leading to a wave of Spanish oppression and domination.  These included restrictions against the Catalan language, high taxation, and finally, encircling the city with a wall that couldn't be taken down and around which new buildings and houses were forbidden.

Tearing the wall down in the 1850s/1860s and building the new city, the Eixample, was a 19th century victory of the Catalonians over Madrid.

So the marches this past weekend were marching not only for themselves, but for memory of Barcelonans oppressed by Spain and herded together behind the walls of the Gothic Quarter almost 300 years ago.