On June 28, 2016, HHS issued a press release and a lengthy proposal for major changes to the severely backlogged claims appeal process for Parts A and B. 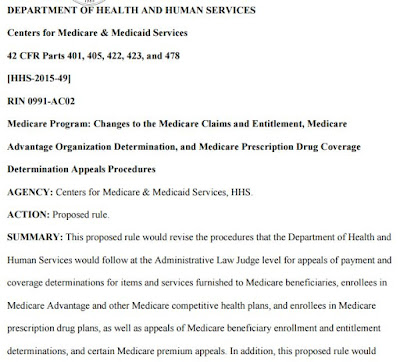 One of the first posts on this blog in 2014 was about the severity of the backlog, and the fact that the actions that were claimed by HHS to resolve the backlog  made no sense at all (here).   There have been many news articles about the backlog, as well as Hill hearings and court cases (e.g. in February 2016, here).  For example:
The 11-page PDF is not dated in its text but has an internal PDF creation date of June 10.

For the first time, they propose a budget increase that is mathematically relevant to the scale of the backlog ($250M for FY2017, up from $107M).  The internal court, or Departmental Appeals Board, would also rise sharply, from $11M to $18.5M.

The document lists six actions that have been taken or are being explored (their words - there's quite a difference).  Such as prior authorization for power mobility devices, although here they veer again into examples that make no sense relative to the problem at OMHA.  The problem with power wheelchairs is fraud, and the HHS system is not swamped out by a multi year backlog caused by actual individual elderly persons unable to walk who are appealing denials of their wheelchair claims.

CMS then lists seven actions found in the FY2017 President's Budget request, such as "filing fees" for appeals.

What IS new and valuable in this 11-page document is the use of specific mathematical models, projections, and graphics showing the scale of the problem and the impact of proposed solutions.  (See a couple sample screen shots below.)

Note, though, that much of this modeling is hypothetical so far, and assumes that all presidentially proposed legislation and budget increases were actually recommended in out-years such as 2017, 2018, and 2019.  Also, I believe some of the modeling is based on a drop in appeal receipts by the ALJ offices (OMHA) in FY2015, which may be due to rules that simple delayed or prevented filing or acceptance of cases as filed cases, a cosmetic effort at best.

From the press release summary of the 399 page rule, some of it lapses back into their habit of talking but making little sense.  For example, one tactic is to "increase decision making consistency among levels of appeal," but since for stakeholders, the only cases in play are denied claims, simply making higher level decisions "consistent" with your case's denied status in its prior decisions seems unhelpful.

Increased Use of Attorney Adjudicators

One key change in the regulations and processes would be expanded use of "attorney adjudicators" (see page 20ff of the inspection version rule):

[We] would expand the pool of available OMHA adjudicators and improve the efficiency of the appeals process by streamlining the processes so less time is spent by adjudicators and parties on repetitive issues and procedural matters.

[We will revise regulations...] to provide authority that would allow attorney adjudicators to issue decisions when a decision can be issued without an ALJ conducting a hearing under the regulations, dismissals when an appellant withdraws his or her request for an ALJ hearing, and remands for information that can only be provided by CMS or its contractors or at the direction of the Council; as well as to conduct reviews of QIC and IRE dismissals. We also are proposing to revise the rules so that decisions and dismissals issued by attorney adjudicators may be reopened and/or appealed in the same manner as equivalent decisions and dismissals issued by ALJs. Allowing attorney adjudicators to issue decisions, dismissals, and remands as described above, and to conduct reviews of QIC and IRE dismissals would expand the pool of OMHA adjudicators and allow ALJs to focus on cases going to a hearing, while still providing appellants with quality reviews and decisions, dismissals, and remands. In addition, the rights associated with an appeal adjudicated by an ALJ would extend to any appeal adjudicated by an attorney adjudicator, including any applicable adjudication time frame, escalation option, and/or right of appeal to the Council. 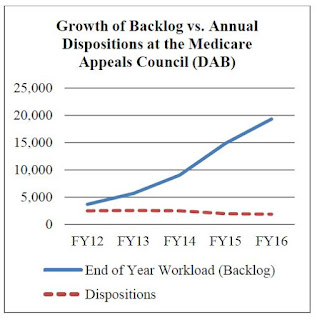 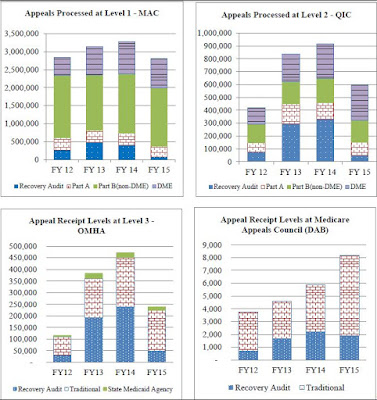 In addition to the GAO report critical of the system's efficiency, cited early in this article, there is a 2015 law review article about the strange customs and pivots of the CMS ALJ system, by Michael Barry, online here.