Medicare Memo re Drug Pricing - Withdrawn from its Website

If you google terms like Medicare and drug pricing or price negotiation, there are a flurry of daily hits, from Congressional hearings to New York Times op-eds to fiery statements from presidential candidates.

In the last few days, the healthcare trade press has reported that CMS released a transmittal that seemed to be preliminary to local demonstrations for drug payment reform.  Then CMS pulled the transmittal, a representative saying it had been "premature."  Links after the break. 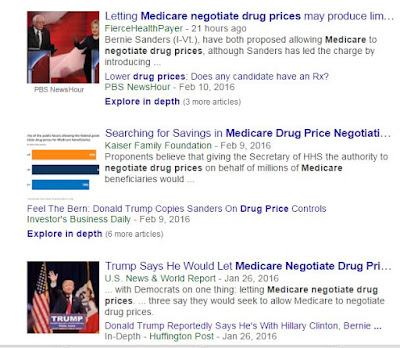 [*] Bloomberg notes the story first broke on the subscription website, Inside Health Policy, as "Part B Drug Memo Accidentally Posted, Not Included in Budget Proposal," here.   The free lead of the IHP story:  "The Part B drug reimbursement demonstration that CMS communicated to Medicare contractors Friday (Feb. 5) isn't part of the president's proposed budget, and the transmittal was accidentally posted, a CMS spokesperson said."   Inside Health Policy further updated on February 10, here.  The subscription journal also posted the withdrawn document (here).  CMS stated in part, "The ASP methodology does not take into account the effectiveness of a particular drug, or the cost of comparable drugs, when determining the Medicare payment amount. The ASP methodology has been criticized for encouraging the use of more expensive products because the add-on to the drug’s cost is a percentage of the sales price while handling and overhead costs may not vary with the drug’s price.....Medicare is also developing methods to test the impact of targeted pricing changes to payments for individual Part B drugs beyond changes to the ASP-based payment. These targeted drug payments could vary across a different set of ZIP codes than those assigned to the different ASP methodologies."