In the December 2015 New York Times article, the journalist focuses on Dan Woska, a 63-year old Oklahoma City attorney who has a a biopsy-verified prostate tumor.  Because the tumor scored only  15/100 on a genomic risk test, he has declined a prostatectomy.  Instead, he is keeping his prostate and its tumor in place, and tracking his PSA four times a year.  As the NYT explains:

Every year, about 220,800 American men receive a diagnosis of the disease, but one-third to one-half of all prostate cancers are not life-threatening, and most of those who have the disease do not die from it.

The problem for patients is that doctors do not know how to distinguish the life-threatening cancers from the slow-growing ones.

Dr. David Penson, chairman of urology at Vanderbilt, states that molecular tests to help patients like Woska are "promising" but he remains circumspect:

“A lot of companies are developing tests that may be promising, but they push them out the door into clinical practice without really doing all their homework,” said Dr. David F. Penson, the chairman of urologic surgery at Vanderbilt University Medical Center, who added, “The rules for new lab tests aren’t as rigorous as the rules for new drugs.”

In mid December, I was in Lausanne, Switzerland for an Alzheimer global policy conference and on the newstand at the train station the current issue of the German newsweekly DIE ZEIT caught my eye.   The cover stated, in my translation, "When does disease begin?  With ever more precise investigations, doctors can make more diagnoses - even when it's unnecessary."   The article inside (where the title is, "Am I Really Ill?") begins by describing a 68-year-old man with an elevated PSA who declines biopsy but is still nervous and uncomfortable about it.

The idea that medical care swings into "overdiagnosis" is not new.  There are full length books on the topic and many review articles in current US and British journals.  As of December 2015, "overdiagnosis" has 8114 hits on Pubmed, and over 500 when "Overdiagnosis" is required as an article title word. [1]

On the book side, the current book, "Risky Medicine" by Robert Aronowitz of Penn is the latest of many on overdiagnosis.  See also "Overdiagnosed" by Gilbert Welch of Johns Hopkins.

In Germany, in December, the DIE ZEIT article contains a quotation attributed to Aldous Huxley, "“Medical science has made such tremendous progress there is hardly a healthy human left.”   (For a recent English essay featuring this quote, here.  For a German essay beginning with this quote, here [2].)

Based on Google searches, this quotation is common in both English and German and the quotation always attributed to Aldous Huxley.  Interestingly, I failed to find a single source online that gave a specific book or article of Huxley's from which this quotation actually originated.   It doesn't appear to be from Brave New World.
___
[1] The earliest English hit is "overdiagnosis of congenital dislocation of the hip," 1976.
[2]  "Die Erforschung der Krankheiten hat so große Fortschritte gemacht, dass es immer schwerer wird, einen Menschen zu finden, der völlig gesund ist." 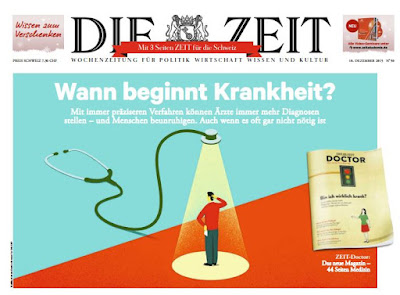