Did CMS Miscalculate the 2016 Price of the Oncotype DX Breast Test?

The Genomic Health Oncotype DX Breast test received a CPT code, 81519, that became active on January 1, 2015.   Based on decisioning making in late 2014, CMS placed the pricing of this code in the hands of its MACs under the Gapfill pricing process.   On September 25, 2015, CMS published an excel spreadsheet of the MAC prices.  The spreadsheet shows a "National Limitation Amount" of $2900 for Oncotype DX.   Based on my reading of CMS's own regulations, I believe CMS miscalculated the amount and it should be $3416.

UPDATE:  On October 7, 2015, CMS released a new Excel spreadsheet, now calculating the Oncotype DX price as $3416.  (Here).  CMS did so by adding the dozen Noridian states to the spreadsheet, so now, the median is $3416 whether calculated by "state" or by "MAC."
The CMS spreadsheet is here.

The table lists all the zones of the historic Clinical Laboratory Fee Schedule - there is one for every state, and a few states have 2 (CA) or even 3 (NY).   The Excel median function calculates the median of filled cells, and ignores empty cells.   OK, so $2900 is the median of the columns of the table.

Why do I think this is wrong?

CMS is bound by its own regulations in conducting its calculation of the median.  Based on regulations, CMS is supposed to calculate the median by "Carrier" i.e. by MAC.   The regulation is plain and simple:


42 CFR 414.508(b)(2) states: "In the second year, the test code is paid at the national limitation amount, which is the median of the carrier-specific amounts."

You can download the full spreadsheet at the link at the top of this blog; the prices reported for each state (zone) and each MAC are also shown below.   While the median of the 21 zones is $2900, the median of the six MACs is $3416, which seems to be what the regulation clearly instructs.   (Most sources say that when there is an even number of samples, calculate the median as the average of the two middle numbers). 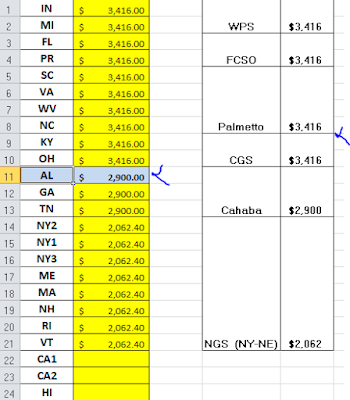 If my reading is correct, as shown in these screenshots, it raises a question of whether CMS can accurately and rapidly calculate the correct weighted median for over a thousand laboratory tests from millions of data points - through in-house methods that won't be available to inspect on a public Excel file like this one.

Trivia Point: The Northeastern MAC, NGS, reported the same proposed prices for all its 7 states except Connecticut, which is left blank in the CMS spreadsheet.  That is, it has 7 states but reported for 6.

Addendum: On September 28, Genomic Health released a press release noting that the CMS pricing was flawed, because CMS did not account for the price paid by its own contractor, Noridian [Noridian's columns were left blank by CMS], and other reasons.  Here.

_____________________
To discuss how the changing healthcare system and Medicare policy affects your company, association, or investments, contact Dr Quinn through FaegreBD Consulting.