On July 16, 2015, CMS held its annual public meeting to discuss new codes for the Clinical Laboratory Fee Schedule.  This summer's meeting was attended by one of the largest audiences ever.

CMS has posted the entire workshop online at Youtube, and I have detailed speaker by speaker meeting notes on this blog.

Note that the most important topics discussed at the July 16 public meeting will be revisited by CMS's new expert advisory panel on lab test crosswalking and policy, on August 26 (here). 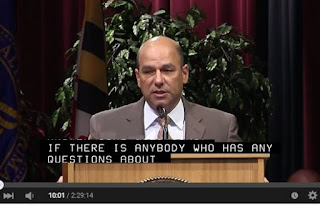 CMS Webpage
The CMS webpage for the summer public meeting is here.
The agenda for the day can be found in a PDF online at CMS, here.

Notes
I have extensive notes, what I call "running notes," which are informal notes I kept while listening to the full meeting. They are NOT a transcript.  Also, this is 23 pages of typed running notes, which I have not been able to proof for spelling.  Here.

Copies of Presentations
During the meeting, the chairman Mr. Glenn McGuirk offered to send presentations to anyone who asked; here is his email, Glenn.McGuirk@cms.hhs.gov  , and here is a Zip file in the cloud (16 mb, 27 items).

The Public Meeting for new Clinical Laboratory Fee Schedule services will take place on Thursday, July 16, 2015. We will accept public comments from that meeting for approximately 1 week. Then, we will determine the basis of payment (either crosswalk or gap-fill) and we will post the preliminary determinations on our web site in September, 2015. We will accept additional comments from these preliminary determinations through October, 2015. The basis of payment and the amount of payment will become final at the same time that we issue the annual CMS instruction for CY 2015 (approximately November). Then, the public has 60 days from the date we issue our annual instruction to request reconsideration of either the basis of payment or the amount of payment for these new test codes. And, the public may comment on any reconsideration requests at the next Annual Public Meeting. In addition, for any new test code that will be gap-filled, we ask our Medicare contractors to develop carrier-specific gap-filled amounts by April 1 of the following year. These amounts will then be finalized on September 30 of that year. Unlike a crosswalk test, the payment amount for a gap-fill test is not established when we determine the basis for payment because it takes approximately 9 months for our contractors to establish carrier-specific amounts. After these prices are developed by the Medicare contractors, we will post them on our web site and accept comments for 60 days after April 1 (not reconsideration requests, just comments). Later in the year, when the gap-filled payment amounts are posted on the web site as final, we will accept reconsideration requests on the gap-filled payment amounts for 30 days. Once the reconsideration process is completed for a cycle, the determination is final and would not be subject to further reconsideration.


If you plan to speak on the new codes, please provide your comments in writing to Glenn McGuirk at Glenn.McGuirk@cms.hhs.gov and indicate your desire to present on any or all of these topics when you register for the Annual Public Meeting


_____________________
To discuss how the changing healthcare system and Medicare policy affects your company, association, or investments, contact Dr Quinn through FaegreBD Consulting.