The rules for establishing RVUs are greatly changed, and the power balance tipped far in favor of the Medicare agency, by § 220 of the Protecting Access to Medicare Act of April 2014.  Medicare has not yet begun to implement its new value-setting powers, but it will probably begin to do so by mid 2015.

The Wall Street Journal won the 2015 Pulitzer Prize for investigative reporting for its series, "Medicare Unmasked."


How does Medicare pay physicians?

For Medicare patients, physician services (both office based and hospital based) are described by nearly 10,000 codes, and each code has an individual price set by Medicare administrators.  The values are AMA CPT codes; the values are known as RVUs.  The values are multiple by a conversion factor to get dollars, so that a 3 RVU service is multiplied by about 31 to yield $93.  RVUs are set by amazingly complex and fine-grained tables of inputs, such as minutes of physician and nurse time, both tiny and significant supplies, an allowance for capital equipment, and some additional calculations that account for malpractice, office overhead, and regional variation in basic labor costs.

Wikipedia's entry point on the topic is here.

How are the values set and calibrated?

These data and calculations are a major driver of physician income in nearly all medical specialties.

The process for setting these RVU valuations have been described to date in a very short section of the Medicare statute, and in correspondingly brief regulations.  (I discussed these in the course of a prior blog; the statute is SSA § 1848 and the regulation is 42 CFR 414.22;. earlier discussion here.)

Many have seemed unhappy

Because some physicians make vastly higher salaries than others, there is concern that the valuation system is less than fair.  A quick Google search shows many articles with titles like these: "RVUs: Hijacked to favor specialists?" (here) and "Lawsuit targets Medicare pay 'bias' toward specialists" (here).  Critiques have appeared in the Wall Street Journal (Physician panel prescribes the fees paid by Medicare, here) and the New York Times (The little known decision makers for Medicare physician fees, here.)  In May 2015, the GAO issued a highly negative report about the process (GAO here, blog here.)  See also Nicholas Bagley's 2013 article, "Bedside Bureaucrats: Why Medicare Reform Hasn't Worked," here; blog here and here.  In addition to the GAO report, CMS now has several more current reports about RVU valuation; Urban Institute 2014 (here), Rand 2015 (here), MedPAC 2014 (here).  These are footnotes 72, 74, and 76 in the GAO report.

The rules for setting RVUs are greatly changed, and the power balance tipped far in favor of the Medicare agency, by § 220 of the Protecting Access to Medicare Act of 2014.

Medicare has not yet begun to implement its new value-setting powers, but it will probably begin to do so by mid 2015.

The legislative language I am discussing is available here.

Types of information collected may be time, practice expenses, prices for inputs, overhead or other accounting information, and "any other element that would improve the valuation of services."  The information may be collected by surveys of physicians, venders, or others; billing or surgical logs; EHRs, or "any other mechanism determined appropriate" by the agency.

CMS may adjust and set RVUs using cost, charge, or other data from suppliers.  A wide range of codes may be identified as misvalued, such as those with fastest growth, billed multiply, describe new technologies, codes which vary among sites of service, codes that may be efficiently provided at the same time, codes with high cost supplies, or [any] "codes as determined appropriate" by Medicare.

Additional sections discuss the application of budget neutrality rules and require cuts > 20% to be phased in over 2 years, not 1.  A final section deals with issues specific to metropolitan areas of California.

It sounds like PAMA 220 was written by agency staff who now have a great deal of authority to adjust valuations they believe are inappropriate.

Since PAMA was passed in April 2014, CMS did not have time to promulgate policies for using the new authority in its June 2014 rulemaking, but this authority will likely begin to be used in its upcoming June 2015 rulemaking.

The policymaking would originate from the Hospital and Ambulatory Policy Group, within its Division of Practioner Services (org chart, here.) 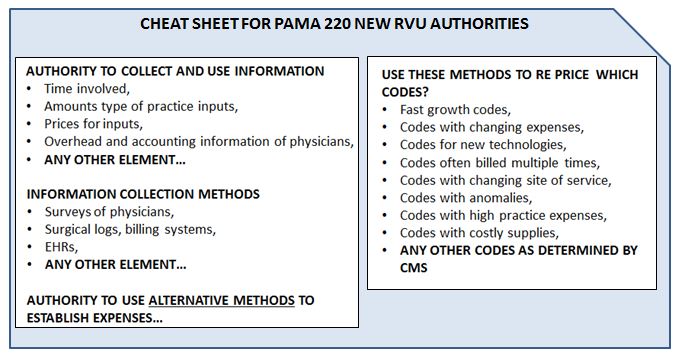