Why FDA's Go-Ahead for 23andMe is Significant

On February 19, the FDA (here) and 23andMe (here and here) announced that the FDA has cleared a Bloom syndrome carrier screening genetic test developed by 23andMe - and has cleared it for direct-to-consumer marketing, fitting the 23andMe business model.

The announcement was quickly picked up by Forbes (here), Genetic Engineering News (here), and by subscription sources like Genomeweb and Gray Sheet (here, here).

Although the FDA's press release does not link to the 10-page clearance letter, another source does, here.

The FDA has three classifications for devices: Class I, Class II, and Class III.  Class I devices are defined by category in federal regulations and do not require FDA clearance or approval (example: tongue depressers, exercise equipment.)  Class III devices are "high risk" and generally require a PMA and clinical trials.  Combination diagnostics (like a KRAS kit assay) have generally been in this category.

In between fall the Class II devices.  These are based on the 1976 FDA device law which has a special category for already-marketed pre-1976 devices and later devises with the same intended use.  This is the 510(k) pathway, based on a seemingly-simple law which has developed an enormously complex body of policy, practice, and guidance.

In recent years, the FDA has been able to create "de novo" 510(k) clearances, essentially deeming a device can be treated as if it had a predicate device, if a product-specific body of rules are followed, captured in guidance documents.

So:  The FDA clearance of the 23andMe Bloom test is a Class II, "de novo 510(k)" clearance.  The FDA is in the process of creating a new regulatory classification to hold it (which will be placed at 21 CFR 866.5940).  (For more on test categories, see here).  The FDA will probably publish a guidance document for this new category.  The letter to 23andMe (which the FDA knows will get a lot of public scrutiny) is so long because it contains information that would normally appear in a category guidance document.  The 23andMe letter is a sort of Trojan Horse through which the FDA can release quite a bit of information about what is really a new policy approach.


Why is the regulatory classification interesting?

FDA's Relationship with "LDTs that are DTC." First, in the current FDA LDT guidance, the FDA has a footnote separating out DTC genetic tests from all other lab developed tests, and banning the marketing of DTC genetic tests unless they have been FDA reviewed.   (Guidance, page 5, footnote 4, here.)

FDA Innovates!  Second, the FDA views its efforts to provide DTC pregnancy, cholesterol, and HIV tests as a hallmark of its ability to carry out innovative regulatory approaches (see FDA comments in its own press release on the 23andMe Bloom clearance).   So: At the same time critics are saying that the FDA's regulation of LDTs may cripple innovation, the FDA leadership can point to this genetics DTC clearance as an example of the agency's high capacity for rapid innovation.

In contrast, the 23andMe Bloom genetic test review also created a new, open-ended category of tests called carrier screening tests - in FDA speak, an "Autosomal recessive carrier screening gene mutation diagnostic system."   (As of now, all of this information is found only within the 10-page FDA clearance letter to 23andMe, here.)

The use of "open-ended" genetic test regulatory policies for broad categories of tests (like, all tests that are "carrier genetic screening") could be very important.  The FDA is talking about regulating LDTs, and possibly, farming out LDT review to third parties such as CAP or New York State.  Such third parties couldn't create new Federal regulatory 510(k) categories for each new gene implemented as an LDT.  But CAP or New York State might be able to apply clear-enough 510(k) rules under newer, broader test categories which could have names like "carrier screening test."

No Physician Prescription Required.  Many IVD diagnostic tests carry labeling, "For prescription use only."  There's no such restriction written into the 23andMe clearance.

NEJM and DTC Genetics; AMP and DTC Genetics.  In May 2014, the New England Journal ran an article quite critical of 23andMe (here), including its direct-to-consumer aspect.  In creating an FDA-endorsed DTC genetic test, the FDA has made an end-run around the NEJM authors. Interesting: the Association for Molecular Pathologist in February 2015 issued a new position statement that is more favorable to certain DTC genetic tests than the AMP's prior policy (here).


Path for 23andMe was Not Easy

Here is where the actual 10-page clearance letter is especially important.  The letter describes what the FDA did from scratch - in much more detail than most clearance letters.  In part, this is probably because the corresponding "De Novo Guidance" for this test category has not appeared.  Some requirements include: 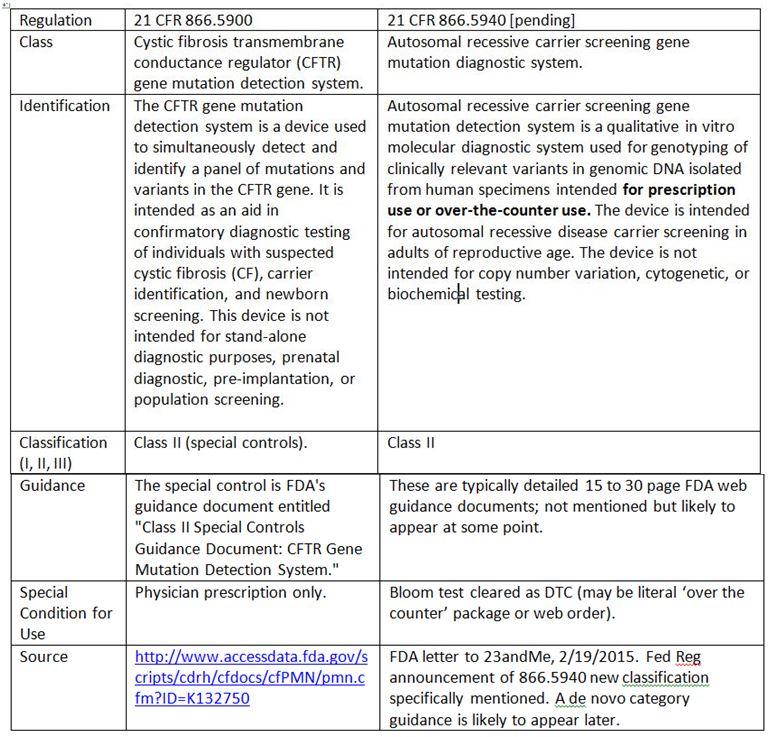