Throughout 2014, the House Energy & Commerce special task force, "21st Century Cures," has held hearings on topics as diverse as orphan drug incentives, telemedicine, and the regulation of LDTs, all tied to the theme of U.S. competitiveness in biomedical innovation.

On January 27, 2015, the committee released an example of draft legislation, covering dozens and dozens of diverse topics, and including more than a few empty "placeholder" sections (such as text affecting FDA regulation of lab-developed tests.)   The website is here; I've uploaded texts like a committee "one pager" and other committee summary documents to the cloud, here.  See an early summary of the 393-page legislative draft (discussion) text at Science, here.  RAPS, the Regulatory Affairs Professionals Society, has a blow by blow discussion online, here.  Their discussion tends to skip over Medicare sections, so I highlight some of those below.  Pink Sheet has a table of explanation of the document, here (subscription).  FaegreBD Consulting discusses where the bill might go, here.

The 21st Century Cures document is not literally a "legislative proposal," but rather a centerpiece to help organize ongoing discussion.  For example, some of the topics may be included just for "airing" and might be very unlikely to be included in final legislation. Modern Healthcare quickly ran a headline, "Dems Balk at Bill" (here).  For the Association of Molecular Pathologists comment, here. 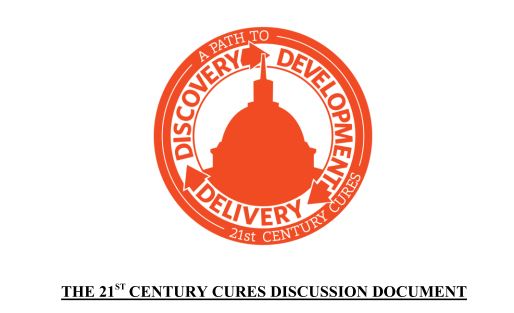 Further comments after the break.

Title I.  I was tickled that the opening pages (§1001) of the nearly 400-page document discuss setting up structured risk-benefit assessments at the FDA, the topic of one of my most popular blogs of 2014.  FDA "shall implement a structured risk benefit assessment framework in the new drug approval process to facilitate a balanced consideration of benefits and risks, and to develop and implement a consistent and systematic approach to the discussion of regulatory decisionmaking [on] the benefits and risks of new drugs."   Just as the proposal aims to bring "structure" to the risk/benefit decision, a subsequent section (§1021) asks the FDA to develop appropriate evidence standards for determinations whether (or when) surrogate endpoints are qualified for use in trials and approvals.
"A surrogate endpoint so qualified...may be used for the purposes of obtaining approval or clearance of a drug, device, or biological product..."    Other FDA sections are related to breakthrough drug approvals and special approval policy for antibiotics for narrow populations with unmet needs.  Also for antibiotics, §521 updates the standards for assessing "susceptibility criteria" for microbes.  For devices, breakthrough devices are defined and a policy for transitional CMS coverage of devices so approved is being considered.   (In the documents, "placeholder language" is a euphemism for an empty numbered space in the bill.)  The next section discusses the FDA's control of communications, from companies' discussion of scientific documents to social media.  Sections 1201 and 1221-1223 are related to repurposing drugs with no more patent life and rewarding investment in dormant therapies.  (Harvard's Benjamin Roin is an expert in this area of public policy.)

Innovations like next generation sequencing of broad panels of tumor mutations have elevated the need to harvest the flow of data from clinical use of such tests nationwide.  (See brief discussion of the ASCO TAPUR proposal and the CMS MolDX "MED-C" proposal, here).   Subtitle F of Title II will "Build a 21st Century Data Sharing Network."  The concept seems generally aligned to initiatives like TAPUR, Flatiron Health, and MED-C.  Also aligned to this theme of real world evidence is Subtitle G, "Utilizing Real World Evidence" and Subtitle H, "Coverage with Evidence Development."  In Section H, a subtle but perhaps important phrasing defines "improved health outcomes" as a determination whether the item or service improves "the diagnosis or treatment" of the individuals.  Read carefully, this may be parsed together to mean that "improving the diagnosis" meets the bar of "improving health outcomes."     Subtitle H on CED also envisions coverage with evidence development by LCD.

For those excited about the FDA regulation of lab developed tests...Title II, Subtitle J is an empty slot for a future position on that topic.  Subtitle Q is a placeholder called simply, "Precision Medicine."

Title III, Modernizing Clinical Trials, would streamline the IRB process especially for trials at multiple sites, and would encourage broader use of Bayesian statistics and adaptive trial designs. (This means the FDA is asked to create and clarify standards for Bayesian and adaptive designs - something it could do on its own.)   Similarly asking the FDA to do something it might do on its own (but apparently doesn't do enough, according to someone), FDA will be asked to establish a process for determining when postmarketing trials "are no longer scientifically warranted" and therefore will be "no longer require[d]."

Title IV requires administrative improvements and reforms at NIH, FDA, CDC, and CMS.  Subtitle H requires improvements including clarity and explanations in the local coverage process (related, Subtitle Q requires real decisions and not kneejerk ones regarding Category III codes.)  In another transparency effort, CMS shall establish an ombudsman for pharma and technology companies to appeal - or at least better understand - agency decisions. Similarly, Subtitle J requests more transparency in the Part A new technology and add-on payment processes.

Subtitle I (§4181) addresses CMS telemedicine authorities.  This section reuses the existing definition (at 1834(m)(4)(F)) but relaxes geographic restrictions.  More interestingly, the section encourages and/or allows CMS to be openminded while looking at where telemedicine services create new efficiencies, reduce associated healthcare costs, help a person be moved to a lower level of care, and improve the process of care.  How about a section that lets CMS do everything that creates efficiencies, reduces costs, helps success at lower levels of care, or improves the processes of care?

While readers who want to know all the details may want to refer to the entire 400-page discussion draft, three  subtitles that caught my eye in Title V are subtitle D/§5062, defining valid real world evidence, §5063, requiring FDA staff to be actually trained in the vaunted "least burdensome means" concept, and §5067 creates a humanitarian device exemption for in vitro diagnostics.