Structured Risk Benefit and the Elucidation of Uncertainty

The Long Struggle to Clarity on Risk/Benefit Decisions

The FDA and international regulators have long struggled with how to assess risk/benefit issues.   For example, in 2007 the FDA's Robert Temple wrote a thoughtful essay on the disadvantages or difficulties of quantitative risk benefit analysis (article online; pubmed), in response to an article promoting the quantitative risk/benefit approach by Hughes et al.

Update: in September 2014, the Institute of Medicine released an eBook based on recent IOM/FDA conferences on risk/benefit:  here.

If Nothing Else, Strive for Clarity

If nothing else, we can start by communicating risks and benefits as lucidly as possible.  There are numerous articles on this -


FDA Publications and Workshops on Clarity, Structure, and Uncertainty of Risk/Benefit

FDA has been stimulated to push further into the world of structured risk-benefit decisionmaking by specific language urging it to do so in the FFDA (Section 505(d); here; for blog discussion of the FDA's five-year plan, see here for a blog discussion and here for an FDA powerpoint.)

Of particular interest are two publications from the FDA.   The first is a 242 page book by Fischhoff et al., on the FDA website, Communicating Risks and Benefits: An Evidence-Based User's Guide.   The second is a more concise, rubber-meets-the-road report that appeared last year, on "structured risk benefit" reporting in clinical trials.  The FDA webpage for this project is here and the 2013 FDA PDUFA V 15 page report is here. 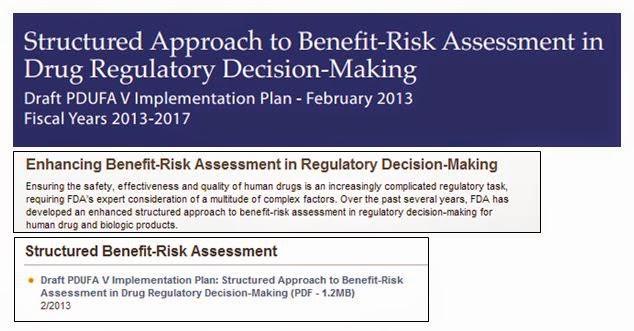 On Monday May 12, the FDA will hold a one-day workshop on a topic especially close to my current interests, the characterization and communication of uncertainty.   The day is titled, "Public Workshop: Characterizing and Communicating Uncertainty in the Assessment of Benefits and Risks."

Payer Decisions Would Benefit from Clarity and Structure, Too

My theory has been that when developers present data and value claims to payers, the payer may often say, "You haven't demonstrated enough clinical utility."   I think this is a misphrasing that could be critical.  In fact, the payer understands the "efficacy" or the "ideal" claim - for example, when our new genomic test is used, 30% of patients will avoid unnecessary surgery.    The payer means, "I'm not convinced of that."  It's the "c-statistic" (I use this in quotation marks, since the real c-statistic is already a proper term) - here, the "c-statistic" is "convincingness."

Something is not convincing if there is too much uncertainty.  A lot of my recent policy work has been in the field of genomic tests, where tests are expected to demonstrate analytical validity (the chemistry is precise), clinical validity (the chemistry measurements correlate to something worth while, like diagnosing diabetes or choosing a correct drug), and clinical utility (health outcomes are improved.)   Now, I've criticized this framework as being OK in the simplest sense, but not really a useful problem solving tool.

Here's the problem.  You want to know if the test will be clinically useful, so you answer the question, "Does it have clinical utility?"  This is a bit like being told to interview four candidates for a job in your department, and your decision-making tool will be, "Who is the best candidate?"   Simply restating the problem you already have, and in the same words, doesn't make you worse off...but it doesn't leverage you forward or make you any better off, either. 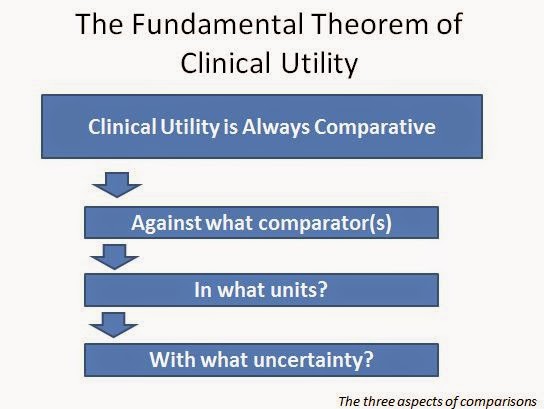 This actually leads to a lot of structured information.

Since I've been giving presentations in which I explain and highlight the underappreciated role of uncertainty (through its impact on convincingness), I was really intrigued that the FDA is holding a workshop on the communication of uncertainty.

In their 2013 PDUFA V white paper, Structured Approach to Benefit-Risk Assessment, they include a table requiring the developer to elaborate on their viewpoint of the uncertainties in the evidence:

They recognize that the developer, and the evaluator, will undertake "conclusions that much be made about each decision factor...these conclusions are a subjective interpretation of the evidence...present the facts, uncertainties, and any assumptions made to address these uncertainties that contribute to the assessment of benefit and risk."

What I'm trying to say about uncertainty for diagnostic test evaluations and negotiations between developers and payers --  is very close to what the FDA seems to be getting at.   I'll close with a three-paragraph extract from page 3 of the FDA report: 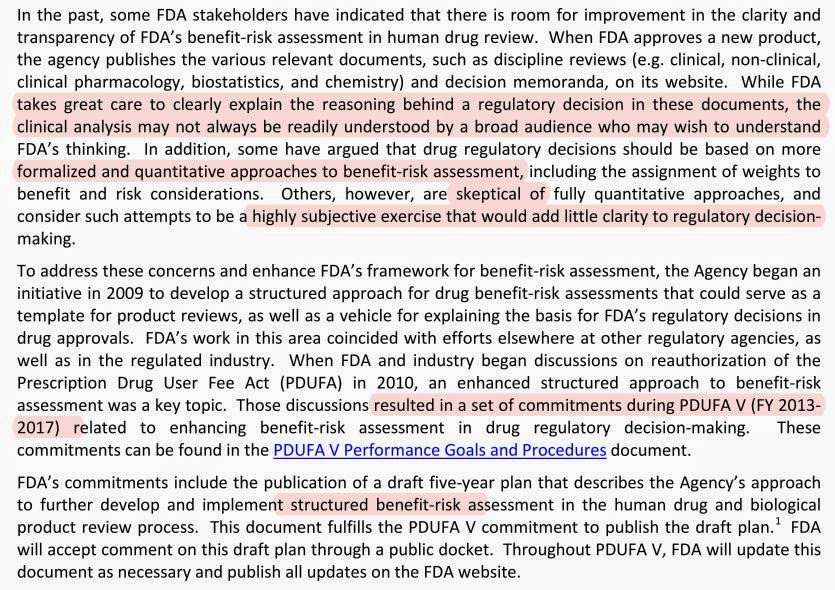 An interesting 2012 paper looks at different ways of presenting the SAME risk benefit information, which create different results in the reader, assessed on three metrics of "Understanding, Perception, and Persuasiveness." -- Here. [***]

Update: in September 2014, the Institute of Medicine released an eBook based on recent IOM/FDA conferences on risk/benefit:  here.

Update: In May, 2015, Congress proposed a minor redline of the FDA's statute regarding use of structured risk/benefit decision-making, here.