This blog began in December 2014, when a no-longer-existing blog ran a critical review of the favorable New Yorker article on Elizabeth Holmes and Theranos.

From December 2014-December 2016, this blog entry records an informal log of online news articles about Theranos.   I do not review it for the dead links that likely accumulate over time.

The original lead paragraphs of this blog, written back in December 2014, were archived here.
For an update on the March 2018 SEC action against Theranos, here.

I'll add one note from June 2018 - an article that, "Pathologists predicted the Theranos debacle, but their voices were missing from most news coverage"!!  Here.  (Archived here).

Email ThisBlogThis!Share to TwitterShare to FacebookShare to Pinterest
Labels: theranos

The FDA has announced a workshop on regulation of genetic tests and next-generation sequencing, to be held in Bethesda on February 20, 2015.  The FDA announcement is here.  The FDA conference page is here.

The agenda for the day has not yet been announced.  However, FDA has published a nine page white paper outlining the agency's view of key topics and issues in NGS regulation, here.

SUMMARY:
The Food and Drug Administration (FDA) is announcing the following public workshop entitled “Optimizing FDA’s Regulatory Oversight of Next Generation Sequencing Diagnostic Tests.” (here) The purpose of this workshop is to discuss and receive feedback from the community on the questions in the discussion paper on diagnostic tests for human genetics or genomics using next generation sequencing (NGS) technology.

WHITE PAPER:  Section 1 is a brief introduction, Section 2 discusses the FDA's regulation of laboratory tests.  Section 3 is a two-page overview of "challenge and opportunities" raised by NGS.  It also notes FDA's several workshops and prior efforts in this area, and the clearance of Illumnia cystic fibrosis NGS tests.  The longest section, Section IV, discusses NGS analytical validity topics (IV-A) and clinical validity topics (IV-B).  There is a discussion of CLINVAR and other public data repositories, and a discussion of how the FDA, clinicians, and public should handle variants of uncertain significance.  There is a short closing section V.

I've also provided online the full-text of the FDA discussion paper on NGS, after the break.

On February 18, 2015, Eric Lander of the President's Council of Advisors on Science and Technology (PCAST) published an Op Ed in the NEJM on the need for special FDA treatment of NGS (here.)  Trade press at Genomeweb (here, subscription).

Can “Clinical Utility" Vary For Two Tests, if “Clinical Validity" is the Same?

Last summer, I was discussing molecular tests with a commercial plan medical director, and he referred to two gene panel breast cancer tests. In his opinion, he felt that the two tests had equal clinical validity, or if anything, the second test had higher clinical validity. However, he felt the first test had “greater clinical utility."

This puzzled me, because I had just published a paper with coauthor Felix Frueh on bringing some structure and order to communications about clinical utility. It had never occurred to me that a test could have greater clinical validity than another, similar test, yet lower clinical utility. In order to draw this conclusion, I believe there is too much “slippage" in the way clinical validity and clinical utility are defined and used. It is more useful to define them in a way such that clinical utility depends on clinical validity plus a use context. If the clinical validity for one of the tests is higher, and the use context is the same, the clinical utility for the other test cannot be better, although it might be the same.
Returning to the Definitions
In a 2014 comprehensive review, Parkinson and colleagues defined clinical validity as “the association between the biomarker and the pathophysiological state or clinical presentation of illness."1 This is essentially the same as that used by Hayes and colleagues in 2013: clinical validity is “how well the test relates to the clinical outcome of interest, such as survival or response to therapy."2
Following these definitions, the test relates what happens in a test tube (a chemical or molecular analysis) to a clinically relevant phenomenon. To be comprehensive, sometimes the test report is analytical (glucose = 125), sometimes it is genomic (we find mutation BRAF V600E is present), sometimes it is an abstract score (“recurrence score = 35"), and sometimes it is binary (a strep lateral flow immunotest is “positive").
Purely analytical tests are related to clinical states by common knowledge or definitions. For combination diagnostics, a clinical correlation is statistically (BRAF V600E is strongly associated with a high chance of response to sorafenib.) For multiple analyte tests with algorithms (MAAA tests), there is usually a double report, one being algorithmic and one being a clinical variable (recurrence score of 35 correlates with a 23% chance of 10 year recurrence). 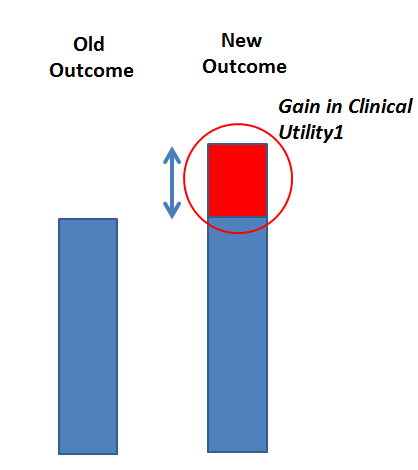 However, there is only an increase in clinical utility for that patient because we did something different than the status quo, a “change in management:" 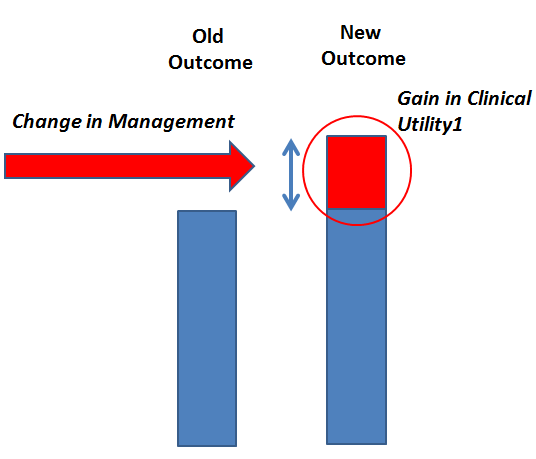 And there could only be a change in management because there was something different about the information we had with the new test, relative to the status quo with the old test (or no test):

This last graphic, shown above, only makes sense if two tests that had “the same clinical validity" would have the same impact on clinical utility in the same use case. This is easy to see if we have two thermometers, or two glucose meters, that have exactly the same reports. It’s also easy to see if we have two different BRAF tests that have the same (or very nearly the same) V600E mutation or wild type reports. The model shown above is generalized for diagnostic tests. For example, if an old MRI scanner has 0.5 cm resolution, and a new MRI scanner has 0.2 cm resolution, the new scanner may have more accurate radiology reports (clinical validity) which lead to better outcomes (correct surgical decisions and other clinical decisions not misled by false positives and false negatives). On the other hand, if two MRI scanners have exact the same image field size, slice thickness, contrast ratio, and resolution, it would be difficult to imagine that two indistinguishable imaging results from, say, a Siemens and a Philips MRI scanner, would have different diagnoses in the reading room or different clinical actions.
-------------------------
1 Parkinson DR et al. (2014) Evidence of clinical utility: an unmet need in molecular diagnostics for patients with cancer. Clin Cancer Res 20:1428-44.2 Hayes DF et al. (2013) Tumor biomarker diagnostics: Breaking a vicious cycle. Science Translat Med 5:196cm63 Parkinson et al. (ref. 1); citing Olson S, Berger AC (2012) Genome based diagnostics: clarifying pathways to clinical use [Workshop]. Institute of Medicine.4 Hayes et al. (ref. 2).5 The Palmetto MolDX evaluation process provides a “fast track" for combination diagnostics approved with drugs in FDA pivotal drug trials. The BCBS Tech Evaluation Center provided a rapid satisfactory report on BRAF kinase testing in 2011.http://www.bcbs.com/blueresources/tec/vols/26/26_07.pdf

On December 9, 2014, the "21st Century Cures" subcommittee of the House Energy & Commerce Committee released ten questions on which it seeks public feedback by Monday, January 5, 2015.   The 21st Century Cures committee website is here, the feedback request is here.  The request for comments is online as a PDF, here.

The request for comments notes that the committee held a roundtable on personalized medicine on July 23, 2014, and a meeting specific to the FDA's proposal to regulate LDTs on September 9, 2014.  (For my coverage of the latter, see here, including a very detailed discussion report, here.)

I've also cut-pasted the eleven questions in full, below the break.

My talk at California Society of Pathologists

On December 5, I had the chance to give a short talk as part of a panel on changes in payer policy and how they are impacting practicing pathologists.  The location was the nationally popular winter California Society of Pathologists meeting, which gives both Californians and pathologists from cold wintry states a December trip to San Francisco for CME credits.   The final program is available here.

I was pinch hitting for a senior Medicare speaker, but did my best both to talk about what is going on at Medicare vis-a-vis pathology and to convey how the field, profession, or industry (take your pick) looks from the viewpoint of a Medicare policymaker.  My deck for the presentation is available in the cloud, here.

My key points were... 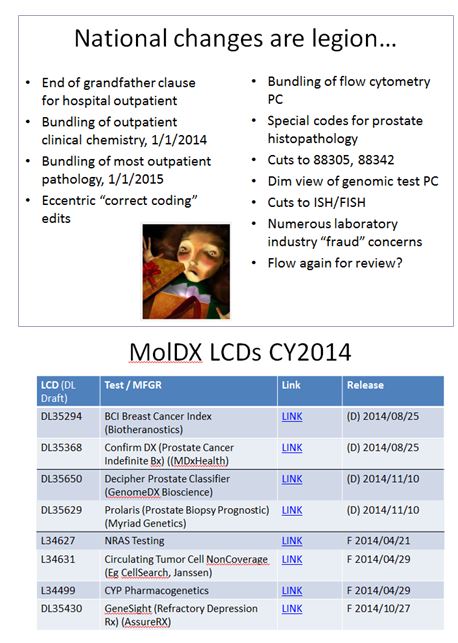