Much attention has been aroused by the major reform of clinical lab test pricing in the Medicare system which occurred on April 1, 2014 (no joke) when President Obama's signature met the Protecting Access to Medicare Act (PAMA).  One of the major sections of the bill shifts the Clinical Laboratory Fee Schedule - how Medicare pays for clinical chemistry and genetic tests - to peg all the federal prices to market-average prices, beginning in 2017.   (For details, see our Foley Hoag summary of the CLFS provisions).  The bill also gives CMS a free hand in resetting the prices of all physician services, including pathology tests - more about that later.

As regards laboratory test payments, the PAMA reforms were generally well accepted by two of the largest trade organizations, ACLA and Advamed, but it has also been portrayed in the trade press as a mix of good news and bad news.

For most new lab tests, there will be several years of pricing at administrative rates set through the "crosswalk or gapfill" method.   This process, which doesn't really change, will follow rules now set in statute rather than merely regulation (42 CFR 414.500 ff).   CMS will set these prices, but there will be an advisory panel.   It is interesting to compare how this advisory panel was watered-down from an earlier proposal (HR 2085, introduced by Congr. Roskam in the House in 2013).  This bill was titled the Diagnostic Innovation Testing and Knowledge Advancement Act of 2013.

In Roskam's proposal, the Independent Advisory Panel for lab test pricing comprised 19 members, including (7) indviduals with technical expertise in clinical laboratory tests, (3) patient representatives, (3) clinicians, (2) laboratorians [seems similar to indviduals with expertise in lab tests], (2) pharmacoeconomic or HTA experts, and (2) experts on the impact of tests on clinical care quality, including genetic counselors.  The panelists would serve 6 year terms, staggered over 2 year increments for continuity.  In addition to taking advice from the panel, the Secretary was required to provide "a justification for the payment basis and payment rate determination, including a detailed summary of the information submitted to, or obtained by, the Secretary regarding [several factors], such that interested stakeholders can readily understand the Secretary's rationale for the payment basis and rate determinations."  The "several factors" included impact on care, technical characteristics, claims data, laboratory charges, private insurance rates, advisory panel recommendation, and public input or other factors at the discretion of the Secretary.

In PAMA, an advisory board is included, but the description has become very brief.

The Secretary shall seek "input from clinicians and technical experts" in the form of an expert outside advisory panel, established not later than 7/1/2015 (in time for the July 2015 crosswalk/gapfill process).  The panel shall be an "appropriate" selection of individuals, with expertise that "may" include molecular pathologists, researchers, and individuals with expertise in lab science or health economics.  They shall provide input on the establishment of payment rates, including whether to use crosswalk or gapfill.  The panel shall also provide input on "the factors used in determining coverage and payment processes for new clinical diagnostic laboratory tests."

In addition, the Secretary shall "make available to the public an explanation of the payment rate for the test, including an explanation of how the criteria [the gapfill criteria - charges, resources, other payers, and data for similar tests] and [the advisory panel suggestions] were applied."

What Does This Mean?

The panel we will actually have, beginning in July 2015, is a less well-defined group than H.R. 2085 would have created.

The panel is advisory only, and its composition is left to the business of the Secretary in the final law.  A similar advisory panel would be the Advisory Panel on Hospital Outpatient Payment, which provides recommendations on APC groupings and other aspects of outpatient hospital policy.  CMS responds to its advise in each year's summertime outpatient rulemaking, and by no means does CMS feel compelled to take its advice.  On the other hand, the meetings provide a public forum, leaving behind a public transcript, which at least provides the guardrail that if anything particular egregious or nonsensical was happening, the trade press could hold CMS to task for it.

One can imagine that if the panel is slanted toward innovation and its rewards, or slanted toward a slow pace of change and very conservative payment, it could actually have some impact on how the gapfill/crosswalk process will work in the next several years.   It's also possible that no matter how carefully composed, the panel could contain pretty discordant opinions and have difficulty reaching a consensus, so guidance by CMS and management by its chairperson could be important. 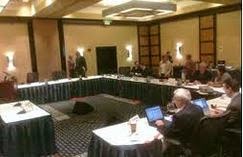 Update:  On October 27, 2014, CMS formally announced it was soliciting nominations for the panel (here), to be accepted until November 26, 2014.

It is interesting the Lab Advisory Panel is also tasked with advising the Secretary on "coverage" processes.   This is one of three nods to the coverage process in PAMA.   The second is a new rule that laboratory test coverage can be created by Medicare Contractors only by the Local Coverage Decision (LCD) process.  The third is that, in radiology/imaging section of PAMA, CMS is to follow rules laid down by consensus guidance committees for imaging, and, CMS is directly asked to investigate if this would be useful for other areas of coverage, like laboratory tests.