This is probably the first time a major, big-budget drama mini-series has made a CMS CLIA inspection a pivotal plot point.

On April 7, 2022, HULU aired the 8th and final episode in DROPOUT, the Elizabeth Holmes and Theranos saga starring Amanda Seyfried.    In the 7th and 8th episode, John Carreyrou of the WSJ finally publishes his initial big expose' of Theranos, and teams of lawyers show up at WSJ, but there's concern it will be a splash in the pan of the daily news cycle.   Keep it in the news, Carreyou's editor says, and that means, something "new."

As Episode 8 opens, ex-lab-employee Erika Cheung sends a complaint letter to CLIA, and CLIA inspector Gary Yamamoto shows up (some screen shots below; an article here).   What follows is history - the Theranos lab was shut down for two years, to start with, and immediately.  Some of the CLIA PDFs are still up on an article at Dark Daily here.

I thought the series was a real star vehicle for Amanda Seyfried, as well as for Naveen Andrews as Sunny Balwami.   William H. Macy plays a party in the patent lawsuits, Stephen Fry plays a Theranos chemist who committed suicide, and Sam Waterston plays board member George Shultz.  Long time character actor Bill Irwin plays Channing Roberts, whom I remember teaching me a med school class in the 1980s, and Laurie Metcalf has a great cameo as Stanford physician-investigator Phyllis Gardner.  In additional supporting roles, Michaela Watkins' is Holmes' in-house attorney, and Kurtwood Smith is appropriately ruthless and scary as David Boies.

Overall, for me, the 8-part series made some of the big budget, big actor films I've seen in the last couple months look like thin "tv movies" by comparison, when rated by strength of acting, characterization, and pulling the viewer into involvement with the multiple story lines. 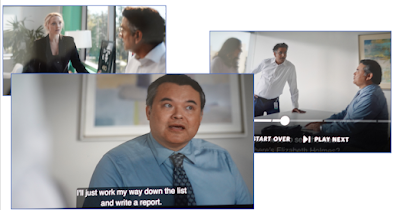