On May 17, 2021, CMS announced it was ending its plan to cut a large number of currently payable ICD-10 codes used in breast cancer, lung cancer, and other major cancers (effective July 1).

The proposal will be put on hold for a year for further study.

We provide links to all the key documents,  and give you some further back story.  This blog includes:

See our original May 5 blog on the topic here and a 6-minute video version here. 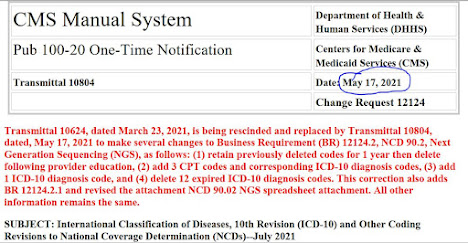 Medicare controls coverage of FDA-approved NGS-based tests in advanced cancer through an NCD (90.2) and its coding instructions.   In Transmittal CR12124, in March, CMS asked its contractors to delete several dozen ICD-10 commonly-used cancer codes from the payable codes.   CMS deleted codes that have been payable for several years, and which are generally considered correct coding for labs, based on rules to code to the clinical data available (see #2 below).  Labs told me these changes would trigger denials (sent to the lab, and sent to the patient with metastatic cancer) for about a third of breast and lung cancer patients.

As I explained in the earlier blog and video, ICD-10 provides the potential for great anatomical detail, even details that are not relevant to coverage decisions or care rationales.   For example, breast cancer nodules can be decimal-point coded as precisely as four quadrants in each breast, left and right.  There is always a fall-back code, e.g. the code "breast cancer, left breast, upper lateral quadrant" has a fallback code for "breast cancer, left breast, quadrant not specified."   (Medicare will pay for the genomic testing regardless of which of the 8 quadrants the metastatic cancer originated in years before, so there's no medical necessity or financial impact pivoting on the extra decimals.)

Labs will always code to the most detail available to them, such as on requisition forms, which can result in using the "breast cancer, left breast, quadrant not specified" option.

Note that there will be cases where even the full medical record doesn't even allow every ICD10 decimal point to be coded.  For example, the recorded location may be "breast nodule, mastectomy specimen, left breast, 2 cm, 12 o'clock position" which is a clear record, but it tells us neither the upper lateral nor the upper medial quadrant, which are needed for this field of the ICD-10.

The deletion of codes like "lung cancer, non small cell, left lung, lobe not specified" which is being put on hold by the May 17 transmittal.

In my original blog, I focused on text found in a 2015 coding guidance called SE1518.  See my original blog for lengthy quotes regarding correct coding to the level of detail available.

It turns out SE1518 is largely lifted verbatim from a foundational CMS guidance document, CMS ICD-10-CM Official Guidelines for Coding and Reporting.  See the 2021 version here.   It's a 126-page PDF.  This is the highest, most authoritative, most official CMS coding guidance, and it belabors that one should code to the level of specificity that is clinically available and at the time of coding.

It's also helpful to know the basic concepts of ICD10.

I'll make up a code.  Fictionally, let's pretend that A01.1 is a skin cancer.

Arguing at all about the last decimal point has little point.  Real-world studies show that the accuracy of ICD-10 coding is as low as specificity 80% and sensitivity 25-35% (e.g. here).  In another study, accuracy in the 60% range, here, with the most granular decimal points being the least accurate and noisiest.   Another study found ICD-10 positive predictive values in the 60% range (here).   Another ICD10 study found that the accuracy for any diagnosis of pancreatic cancer was almost perfect (99%, for pancreatic cancer present/absent).  But the coding accuracy with respect to subregions of pancreatic cancer - the ICD10 decimal points - fell off drastically (here).

Another major national reference source is the "ICD-10 Coding Handbook 2021," a 700-page work edited by Nelly Leon-Chisen.  She is a senior advisor to the AMA CPT Editorial Panel for coding matters, and has her own Wikipedia page.

The usage of full-length codes is discussed on page 6 (much as I showed above with "cancer of the left hand, 3rd finger.")  Page 37 discusses that correct coding is always based on the specificity of detail available to the professional coder at the time of coding (Leon-Chisen makes the same point as the ICD10 CMS guidebook).

She also emphasizes the role of time in the course of disease in determining what is clinically relevant (page 38).

For example, at the time of an FNA in Boston in 2005, the quadrant of a breast with a small palpable nodule is relevant information.   Fifteen years later, in 2020, after the woman has long since undergone mastectomy, radiation, visits to several hospitals in several states, and transfer to new oncologists, let's say she now has metastatic cancer to the liver, gastric bleeding, and is urgently admitted to hospital in Phoenix.   The metastatic cancer is extremely relevant to her admission.  The breast cancer quadrant of the small nodule found decades before is not relevant.

Page 48 discusses one shall code to the highest level of detail, and depending on the case, the highest level of detail may in fact be: "quadrant not specified," or "bronchus not specified."  Also, it may surprise some, but correct coding is also speculative, if the chart says diagnosis XYZ is "possible, probable, or suspected" then diagnosis XYZ is the correct code (page 53).

The Most Specific Code May Be "Other," Even With the Full Chart

Sometimes the most specific code is "other:"

Against these codes, if the lab proves that the patient definitely has "Bug F," and the coder knows it, then the most specific code is still [A03] "pneumonia, bacterial, other bug."

CMS actually disagreed whether the OIG concern was valid.  For example, the ICD10 coding could be entirely correct.  If the patient has stroke, plus also pneumonia, that's what he has.

CMS Goes After "Unspecified Codes" in the Inpatient Proposed Rule

What really made my head spin, this issue of ICD-10 and last-digit coding rears its head in the FY2022 Inpatient Proposed Rule, which was released in early May 2021.

Let's discuss.  First, this is a argumentative example.  The hospital inpatient record will always state which elbow has an ulcer, so "elbow not specified" is obviously pretty lax coding.   (And, the example pressure ulcer in a Medicare patient just sounds like mismanagement, although it might be pressure ulcer, present on admission.)  Second, for data, CMS lists the count of codes that have the word "unspecified" by category, but CMS does not state the number of claims (number of admissions) affected, which would be important to know.   Third, and most importantly, as I read it, CMS doesn't propose to remove these codes from primary diagnoses, which set the main DRG.   They would only be deleted from the secondary codes that can set the complications DRG.

So in the case of pressure of the elbow, CMS has a fair argument the claim is poorly coded if it comes in as "side not specified."   Let's leave that to the side, though (pun).  Instead, think about this is real-world healthcare and payment.  If the patient has four days of extra hospital stay, special antibiotics, and discharge to nursing home, while I'd like to see the "left" or "right" coded, it's hard to fathom that this nuance of administrative claims charting makes any difference ever again, to anyone at in Baltimore at CMS, or anyone in US public health, or the outcomes of the patient, the revenue flow, etc.  It's like you signed a form in blue ink or black ink, and it goes into a box never to be seen by a human eye again.

Coding for a Cancer Lab versus Coding for a Hospital Chart.  We can also distinguish the inpatient coding examples from the case of a cancer lab.   For inpatients, the professional coders have all the records, A to Z, and they should figure out if the pulmonary embolism was left or right, or if the toe cancer was left or right, and so on.

But further detail is irrelevant for our late-stage metastatic cancer patient.   And, as I indicated for the elbow laterality, CMS would pay just the same for breast cancer (now metastatic) had it originated in any of the 8 quadrants, so it's irrelevant for determining medical necessity and payment.  And nobody, ever, ever would study third-party lab genetic test orders on a 1500 claim form in a computer, coming in ten years after a mastectomy, to find out what nodule the long-ago needle biopsy was made in.