Yesterday, on September 30, 2020, I reported that the CareDx AlloSure new LCD had been finalized and was favorable, based on information gleaned from documents inside the Palmetto website (here).

Today, October 1, CMS posted the finalized LCD which will be effective November 15.  As predicted yesterday, the title of LCD L38255 was changed from "AlloSure Cell Free DNA Testing" to "AlloSure or Equivalent Cell-Free DNA Testing."

See the new LCD online here.   Simultaneously, Palmetto has posted a billing and coding article A58387 and a "Response to Public Comments," A58397.

Cloud Zip File
I've linked to the relevant articles in one ZIP file which includes (1) Draft LCD, (2) Final LCD, (3) Billing article, (4) Comment article, (5) Redline of draft and final text.
The redline shows that the LCD text was modified primarily to correct typos or spelling errors.  A sentence was added making clear that equivalent tests will be covered on a rolling basis (by edits to the coding article).   See the cloud zip file here. 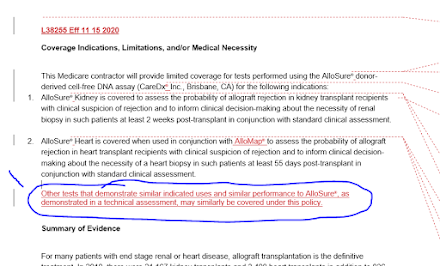 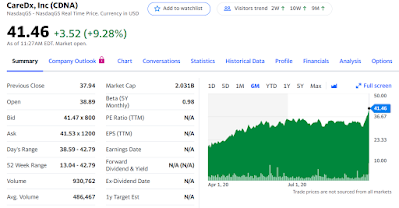 But Wait, There's More: One Open Puzzle
As I noted at the end of yesterday's blog, during the year that the AlloSure LCD (finalized as "AlloSure or Equivalent Tests") has been under review, MolDx has also produced in June 2020 a more generic LCD for liquid biopsy tests for transplant rejection (here; cloud copy here), DL38568.  This newer version DL38568 may replace L38255 when DL38568 is finalized; it's hard to predict.