Update:  The budget act, including the PAMA delay, was signed by President Trump.

Any PAMA price cuts for CY2020 will continue.


The LAB act was formally introduced into Congress earlier in 2019, but many bills are introduced that die before entering actual legislation (the tadpoles to frogs metaphor). See June 2019 trade press here.

As 360DX reports today (December 18), the LAB act and its one-year delay of PAMA has been introduced into 1600-page omnibus financing bills that are now circulating on the hill.   360DX here.

Currently, CMS would run a data collection cycle in 1Q2020, to set three-year prices beginning January 2021.   The data collection would be based on lab claims paid in 1H2019.

LAB Act would stop the clock for a year, while also looking at flaws in the PAMA design process via a required investigation by the MEDPAC - the Medicare Payment Advisory Committee.

At least one version of the Hill language is here, see page 1428 (Section N, HHS, Subtitle A Medicare, Medicare section 105 (of 8 sections).)  This is a typical legislative pathway; lots of 4-page little bills introduced by themselves during the year get rolled up as "page 1,428-31" of an omnibus bill at the end of the year. 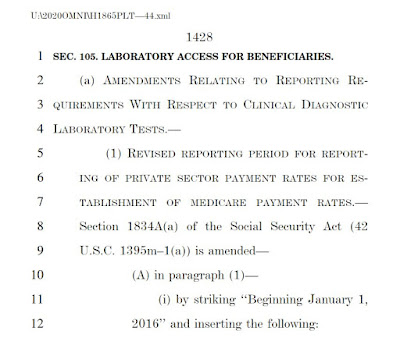 Legal eagles will note that some aspects of the bill shift around, such as whether the PAMA report would be conducted by the National Academies of Science on the one hand or MEDPAC on the other.