Health Affairs: Twin Articles On Truly Reforming and Rebooting US Coverage & Reimbursement; And A Few Other Updates

Here, I highlight very recent twin blogs in Health Affairs about reimbursement policy reform -- followed by links to a flurry of new articles (and a book) at NYT, WaPo, on perceived excessive health care pricing.

It turns out that Health Affairs actually published twin articles, both on December 18, on the theme of seriously rebooting and redesigning reimbursement, at CMS and elsewhere in the US health system.

Pricing Always In The News

There's almost always something monthly, if not weekly, news about US pricing.   The New York Times' Margot Singer-Katz had a long lead article on perceived excesses of US pricing on December 27, 2019 - here.

Although not brand new, the Washington Post online was highlighting, as part of 2019's year-in-review, an August 2019 article by Eli Saslow about long lines of poor citizens shuffling into courtrooms being sued by their local hospitals, for example, after two-hour $8000 emergency room stopovers.  Here.  (In fairness to the rural hospitals, Saslow notes many are teetering on the edge of bankruptcy themselves, just like their patients.)   NPR and others reported how a woman saw her doctor for a head cold and ended up with $20,000 of marked-up out of network shotgun testing virology bills (here) - many of which her insurer paid.

And there's usually something new every week or two regarding surprise billing legislation on the Hill; see a flurry of letters form House Energy & Commerce to the major national insurers released on December 18, here.

Since I first heard of his work doing a healthcare MBA in 2000, I've tracked Princeton health economist Uwe Reinhardt, whom I  heard speak once at a conference.   He died unexpectedly of sepsis at age 80 in November 2019.

He was based known for the argument that US healthcare doesn't so much use any more resources than other countries, but simply has higher pricing (2003 here, and 2019 update here.)

Second to that, we also have much higher administrative costs (see NYT December 31 on docs and nurses buried in paperwork, or actually e-work).

In brief, this past week I learned that Reinhardt left a completed book on US health policy and economics, which appeared in May 2019.  Here ("Priced Out;" hardcover, ebook, or audiobook).  Reviews here, here.  Videocast of a 90 minute panel discussion hosted by KFF, here.  Let me also note, the book brings together many good graphs in one place. 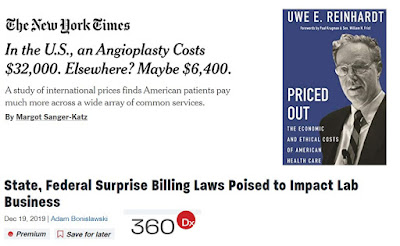 This article notes that the October Trump Executive Order requested modernizations at CMS, and the twin articles in Health Affairs elaborated on that Executive Order.

Strengthen the Parallel Review Process
to Streamline Medicare Coverage
The Parallel Review program is a collaborative effort between the Food and Drug Administration (FDA) and CMS that reduces the time between FDA approval of a device and Medicare coverage of that item. This proposal strengthens the existing parallel review process to improve device manufacturer participation and increase transparency. [Budget Neutral]

Thanks to a former CMS senior official for pointing out that these Trump 2021 paragraphs are pretty similar to Obama 2012 paragraphs in a document called bioeconomy blueprint:

Expanding the Coverage with Evidence Development Program to Drive Innovation: Reimbursement for medical treatments is a powerful driver of industry investment. Under the Coverage with Evidence Development (CED) program, Medicare reimburses for promising new technologies that do not currently meet the standard for full coverage. The CED program requires more evidence to be collected to determine full potential benefit of new technologies. The CED authority has existed for more than a decade but has been applied sparingly. The Centers for Medicare & Medicaid Services (CMS) is poised to implement the next phase of CED by better defining the parameters and guidance for CED so it can be used more widely and effectively as a driver of innovation. CMS believes that the lessons learned during the initial implementation of CED can inform its more frequent use and create predictable incentives for innovation while providing greater assurance that new technologies in fact fulfill their initial claims of benefit.

Reducing the Time to Market by Implementing Parallel Regulatory Reviews for Medical Products: FDA approval and CMS coverage significantly influence the development and commercial success of new medical products. The time required for FDA and CMS to sequentially review new medical products—often multiple years—is frequently cited as a disincentive for innovators and investors in the medical technology industry. A significant portion of this delay is due to the fact that most sponsors of new products approach each reviewing agency separately, first working to meet the evidentiary requirements of the FDA and only later focusing on the requirements of CMS. To address this problem, the FDA and CMS initiated a pilot program for the parallel review of medical devices, creating a pathway for new medical products to be simultaneously reviewed by both agencies. By engaging CMS earlier in the process, the parallel review program is expected to limit the duplication of effort on the part of product sponsors and agency reviewers and reduce the time it takes new products to enter the market and receive payments from Medicare and other providers.