For 2019, CMS posted new rules for the Local Coverage Determination process, the first substantial update since the 1990s.

However, it can be confusing to understand what is the same and what is dropped or wholly new.   I've tried to show major features of the old and new process in two slides.

The PPT slides are open-access in the cloud here.


Expect the process to take a full year. 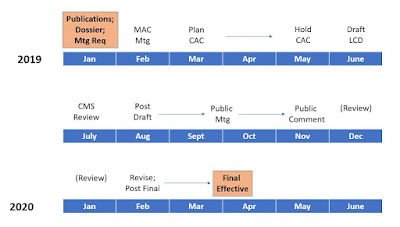 All draft and active LCDs are in an online CMS database, here.

There was a CMS press release on the changes in October 2018, but frankly, I found it more confusing than helpful and it discussed a "faster" process which I can't see in the real world.  Here.