On September 4, 2019, PLOS One published an open-access study by Naber et al. that is highly critical of the clinical effectiveness (life-years-gained, LYG) and the cost-effectiveness ("worse than any other method") for Cologuard (CPT 81528, $512).

See the paper here.  For trade news at 360DX, here.  360DX discusses potential flaws in the study; I'm not an epidemiologist and I'm discussing the study as-is.  I did notice (see also 360DX) that the costs of a Medicare colonoscopy were significantly underestimated by the authors.  See an Exact press release here; an article in MedTechDive here.

The paper is funded by HHS/CMS grant to the Mitre Corporation, but there are no Mitre authors listed.  Authors are from the Netherlands, Univ MN, Kaiser, RAND, MGH, MSK, etc. 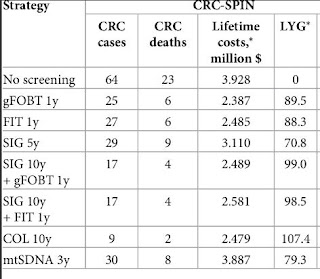 Authors report that Cologuard could be a dominant cost-effective strategy if cost was reduced to about $10.

The introduction states directly that CMS requested the analysis, asking whether Cologuard was a cost-effective alternative, and if not, at what reimbursement rate or screening interval Cologuard would be cost effective.

Note that in addition to the 20-page PDF publication, there are a number of supporting figures online, inline with the web text.
____

Cologuard was the highest-line-item cost in the CMS molecular payments for 2017, table:

In Statute, at 1861(oo) and (pp)Medicare's add-on line item benefits for preventive prostate testing (which have never been used) include cost effectiveness; for colorectal preventive testing, they do not (here).  When preventive benefits are added after USPSTF approval, cost may be considered. 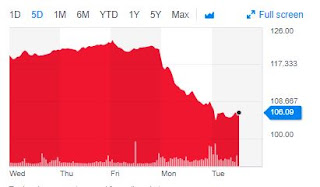 Note that there are two required levels of compliance with fecal testing.  One is whether the test kit is ever used and returned (the ick factor).   The second is, when you have a positive test, do you advance efficiently to a colonoscopy to investigate (the oh-no colon prep factor and the day-lost factor).