The Association of Molecular Pathology (AMP) has a long record of producing active, detailed policy statements and position letters, some on its own, some in collaboration with other groups (such as College of American Pathologists, CAP).

It's worth checking out form time to time, and the webpage is in a clear and accessible format.


Just a few of the recent comments on that webpage include:
The June 20 comments wrestle with MolDx's attempt to craft reasonable policies under some of the poorly written or even ridiculous aspects of the CMS NCD on NGS testing.   After much protest in early 2019 (see trade journal articles and AMP's February 1 letter to CMS), CMS took a comment period May 29-April 29 on how the NCD could be revised.  CMS will issue proposed revisions for another round of public comment by October 29. 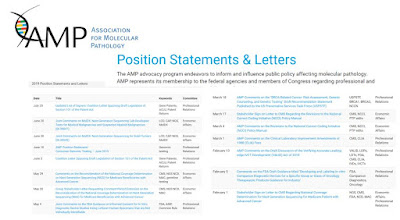 In solid tumors, the CMS NCD covers an NGS test only if it has not been used before in the same primary diagnosis of cancer...that sounds like coverage x1.   AMP/CAP note that when tumors are relapsed, recurrent, or simply metastatic, they often show gains and losses in mutations, "rendering them, in effect, new cancers."   MolDx may have been thinking this too, since it seemed to narrow the CMS instruction to apply only to tests performed "on the same tumor specimen."

AMP will also host a "Molecular Pathology Economics Summit" in Washington, Friday, September 20, 2019.  Here.  It look like registration is $975 for for-profit organizations, $375 for non-profit. The preliminary agenda is online here.