In annual Outpatient Proposed Rulemaking for CY2020, CMS proposed a series of changes to its Date of Service rule, which governs the lines of payment (or non-payment) for tests associated with hospital settings.   Hospital settings include inpatient and outpatient biopsies, but also blood draws taken while patients are visiting a hospital-related Outpatient Clinic.

The whole rule is at 84 Fed Reg 39398ff (August 9, 2019), but I have put the six pages dedicated to Date of Service changes in the cloud here, with light highlighting (e.g. section headings):
The rule opens with a very detailed history of date of service policy going back nearly twenty years, to 2001.  If you plan to take a Master's Degree multiple choice test on DOS trivia, this is required reading.

Basically, the DOS rule has two aspects - who can bill for the test (the hospital or the performing lab), and whether the test is billable (for example, routine clin chem is now "bundled" to outpatient procedures and outpatient office visits).

In the classic form of the rule, from about 2008-2018, lab tests on outpatient specimens had to be billed by the hospital, if ordered and performed within 14 days of biopsy and blood draw.  If ordered and performed after 14 days (e.g. on a 15 day old paraffin block), they had to be billed by the lab.  In 2018, CMS changed the rules so that human genomic tests (and ADLT tests) could be billed immediately by the laboratory.*

However, as CMS explains in this rulemaking, due to industry complaints, CMS has delayed implementation of the new rule for a total of two years (most recent delay is through January 2020).   So right now, either hospital or genomic lab can bill for a human genomic test on a hospital outpatient biopsy or blood draw.  CMS DOS website here.

CMS is probably uncomfortable with this ambiguity about who will bill, and they propose three options (p. 39601):


(1) Change or unwind the new rule, (2) narrow the new rule only to ADLT tests, and if the rule is implemented (the lab must bill), or (3) then make an exception for blood bank labs, which only want to bill via the originating hospital and never directly to CMS. 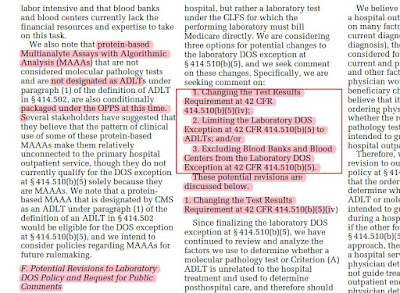