Should Evaluation of Psychiatric PGx Focus on the "Red Drug Patients?" (Yes.)

Both in the US and Europe, there has been a marked uptick in the interest in pharmacogenetics in the past five years.

Benchmarks include the growth of the CPIC - Clinical Pharmacogenetics Implementation Consortium, and a range of research and investments over the past several years by NIH-IGNITE (Implementing Genomics in Practice).

There is an increasing consensus that implementation science is key, such as providing integrated PGx data in electronic health records, coordinated with pharmacies/pharmacists, and providing the right tools for the physician at point of care and across a health system.  This is equally discussed in the U.S. and in Europe (see e.g. Blagec et al. 2018, open access, here.)  I discussed this emerging consensus around implementation and patient selection in a white paper for Thermo Fisher in mid 2018 (here).

One of the most discussed RCTs in pharmacogenomics, certainly in the financial community, is the Greden et al. "GUIDED" trial, using the Myriad GeneSight test and supported by Myriad.  (Not open access, but here.)   This study - Genomics Used to Improve Depression Decisions - compared treatment as usual (TAU) to a pharmacogenomics-guided intervention where physicians could utilize information from a PGx test panel.    In the text arm, using PGx, response and remission rates were improved, but another metric, mean symptoms, did not (p=.10).   Assessment were performed at weeks 4, 8, 12, and 24 (1, 2, 3, 6 months).  The final per-protocol cohort was 1398 patients (717 in TAU, 681 with PGx).

One of the emerging concepts in PGx trials is to use higher-risk patients.

Here, in GUIDED, patients had "treatment resistant depression," failing at least one medication in the current episode of care.  Other research, not specific to depression, also looks to flag high-risk patients for preemptive pharmacogenomic testing (e.g. see the firm YouScript, here, which can screen population health system records for patients at highest risk of PGx-mediated adverse effects).

Although not a primary endpoint, Myriad has pointed out that the largest impact on health outcomes was in a population created not by the a priori entrance criteria (TAU), but by the gateway test itself.  This is the population of patients who are currently on a "red" or "not-recommended" drug.   In these patients, the point of testing would be to convert them to a higher-chance response on a "green" or "recommended" drug.

In an online presentation, Myriad emphasizes this data analysis (here).   Basically, this sorts out 30% of patients who are already on GeneSight "Green" medications and have no significant expected GeneSight benefit.*  When you do this, you get larger impacts on the 70% of remaining patients, which you would expect, and all the p-values are below 0.05: 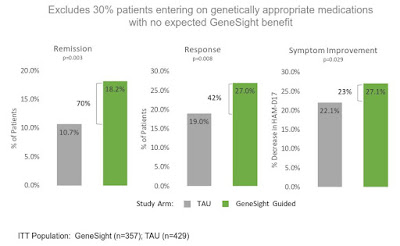 You Would Expect GeneSight's Result, And Its Absence Would Be Worrisome

Note that you would expect the GeneSight data to show larger favorable impact by removing the "already genetically appropriate" group of 30%.   Meaning, if this did NOT happen - if the clinical benefit occurred but it was somehow exactly level between green-drug and red-drug patients - it would be pretty worrisome that green/red identifications were actually irrelevant.  You might worry it was a non specific placebo effect, for example.  That doesn't happen, the "red-drug" patients get bigger effects and the green-drug patients don't.

Expect Test Impacts to Be Positive and Real...but Finite

Impacts of PGx testing may be real, useful, but modest per 100 patients.  For example, if 11/100 patients remit in the control group, and 18/100 in the test group, that is 8/100 who benefit.   Discussion can shift not to "whether" there is an impact, but whether that is or is not "enough" to merit testing.   Generally, one background fact is that a PGx test has a pretty low risk profile, making it easier for the clinical risk/benefit to be positive.   And usually one in ten effects are impactful on practice; if one drug benefits 30 patients per 100 and another 40 per 100, the second drug will be favored, while the net impact is 1 patient per 10.  For example, if you run a Herceptin test and 2 patients in 10 are test-positive, the 2 get the drug, and one of them lives a year longer, that is a one-year benefit for 1 patient of 10 originally tested.  (See also Marquart, Chen, Prasad, 2018, here.)


Fitting PGx To Other Accepted Principles in Precision Medicine Analysis

To me, this could have been a study design in itself.

The whole era of precision medicine, since Herceptin, has been to look at the impact of a precision medicine intervention in a defined subgroup.  This is how we evaluated Herceptin - see the book Her2, by Robert Bazell, 1998.   About 20% of cases are her-2-neu positive.  We then look at the impact of Herceptin on these 20% of patients; we don't dilute the impact across the 80% of patients who are test-negative and don't get the intervention.

If you diluted that effect over all women who "got the Her2neu test," the 80% who don't test positive and don't get drug, the effect would be diluted down by about 80% (e.g. 10% net effect included negative patients) and might not be statistically significant at all.   Nobody suggests running the analysis this way - nor for EGFR in lung cancer, for ALK in lung cancer, and so on.   There are some reasons for looking at the whole population - for example, the Her2neu, EGFR, and ALK tests are run on the whole population and contribute to population costs (you have to run five $150 Her2neu tests, on five patients, to find one positive patient, so the test cost per positive patient is $750, not $150).  And you can ask whether there are adverse impacts on women who test negative (usually that is a minor consideration, and applies to other tests, like estrogen receptor).

Gregen et al 2019 is not the only study with this type of finding.  In a large, 700-patient RCT that also looked a treatment-resistant patients, the difference in test performance was higher in the "severe depression" patients (although also significant in the moderate/severe cohort).  See Bradley et al, 2018 (open access, here) :

Another RCT, with 150 patients randomized, was similarly favorable for panel PGx use in difficult patients, Singh et al., 2015.  Open access here.  It was discussed favorably in a 2018 review (see Zeier et al., below).

Can We Reduce the Boil On This?

Focusing on the population  who actually qualify for a test-directed intervention would reduce the temperature of current debates on psychiatric pharmacogenetics.   In the past year, FDA opined the subject in a confusing way, and JAMA carried a negative-toned news article.   There was a fairly balanced review in the APA journal, by Zeier, Nemeroff and colleagues (article here, APA trade press here).   Zeier has a publication date of September, but was E-pub in April.   Unfortunately, while creating a document for the APA position, due to timing,  Zeier et al were not able to review either the 700-patient RCT by Bradley et al. nor the 1400-patient RCT by Gregen et al.

While these were appearing, there was what I read as a somewhat "just throw anything at the wall" op ed in JAMA.   To me, many of the concerns therein about internal controls and validity are resolved by the precision-medicine-paradigm of analysis looking at more severe patients or the "non green drug" patients, the same way we assess the value of other precision medicine tests.

There is a famous quotation to the effect, "Statistics is common sense applied to numbers."   It seems like common sense not to dilute the impacts of a Herceptin intervention on the 80% of patients who test away from that intervention and don't get it.  By the same token, in these several psychiatric PGx trials, the actionable intervention is shifting from a red to a green drug, and "already-on-green-drug patients" just don't receive that intervention.

*To my eye, at most there would be a slight benefit in that the "green drug" ill patients might be switched to another green drug while avoiding a "red" drug.