FMI released quarter earnings and held its investor call on May 9, 2017.   The press release is here, the earnings call transcript is here (with some technical problems), and the full SEC quarterly report is here.  The webcast is archived here.  Coverage at Genomeweb is here.  This week share price fell from about $36 to $33 before settling around $34.50.

Clinical cases were nearly 14,000 for the quarter, up 55% year-on-year.   However, revenue per case was $2,700, against a recently established CMS price of $3,416.   (FMI had not been paid by the MAC in its home jurisdiction, Massachusetts, and opened a new lab in a different MAC territory, in North Carolina under PalmettoGBA.)

Hematopoetic test volume was down. 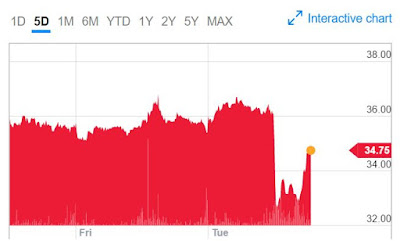 Biopharma test volume is fractional to clinical volume (1,800 vs 14,000 quarterly tests) but appears to pay better per test ($14M versus $12M quarterly revenue.)

Total quarterly revenue was $26M (it was $30M one year ago).  Expenses were $55M, with a simple burn rate of about $30M/quarter or just over $100M per year.  They stated that CMS payments began only in March, late in the quarter.

The company discussed its pending 2H2017 FDA approval for a universal companion diagnostic, and the CMS parallel review for an NCD, which is going to appear at the same time.

CMS will issue a special code for the FDA-approved FoundationOne test.  However, the company will have two pricing options.

Of note, Foundation said they were discussing other types of expanded coverage with Palmetto - whether this is breast, hematopoetic, or other cancers is unknown.

Foundation gave considerable time to discussing Total Mutational Burden (TMB) which we discussed in a previous blog.   There were some interesting side comments; while high TMB  is predictive of immunotherapy response and vice-versa, they noted some genetic conditions where high TMB was not predictive but secondary factors were important; this clouds the simple story about TMB.   FMI highlighted multiple trails being launched with pharma collaboration in immuno-oncology.

They emphasized that FMI provides a full spectrum of mutational changes PLUS TMB and PLUS MSI.   However, to my eye, TMB is a mathematical calculation that could essentially be reproduced by other large gene panel tests.

And, presumably TMB will not be part of their FDA test, which might raise marketing complexities.

Foundation discussed market research that oncologists were increasingly interested in broad gene panel testing, but Genomeweb has published several stories recently (here, here) reflecting surveys that oncologists were concerned about hype over gene panel testing and limited outcome impact, e.g. via NCI MATCH.   Similarly, Medscape reported a survey that genomic oncology was both important and overpromoted (here), and in an editorial in today's JAMA on cancer genomics, the author writes, "Progress seems to be slowing," here.   One study that got considerable press was a 36-patient observational study from Intermountain, which is a pretty thin study for tests that are likely getting some 100,000 uses per year (a simple guess that no more than 1/2 is FMI and it's circa 50,000/year).  As another for-example, we don't know why FMI's hematopoetic test volume was soft - slipping clinical demand, competitors, or other.

Foundation believes that its FDA-approve test will be an asset with oncologists, who want clear CDx-based guidance, and Foundation noted it provides clinical trial guidance as well.

Simplest Back of Envelope Take-away

In round numbers - with liberal approximations - they do about 10,000 clinical tests a quarter for about $10M in clinical revenue a quarter, or about $1000 per clinical test including payers and non payers. 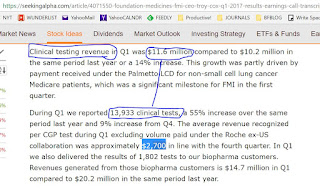 In contrast, in their SEC report, they write, "For our biopharmaceutical customer revenue that was based on a negotiated price per test, the average revenue per test was approximately $3,500."  For the quarter, selling and marketing expense was $16.4M (more than clinical revenue) and general expenses were $15.3M (more than clinical revenue, also.)

In their SEC report, FMI also notes that the CMS Oncology Care Model (OCM), which monitors oncologists for total spending over 6-month episodes, could impact the utilization of FMI tests.