Someone asked me today about 2012,2013, 2014 era CMS CLFS pricing decisions for crosswalk/gapfill.   Currently, CMS archives preliminary and final decisions back to CLFS-CY2013 (decisions in summer and fall, 2012).

However, at some point they may delete the back archives, such as they are.  I have stored in the cloud in a Zip file what CMS has available as of October 2015.  Here.

Extracting stamp dates inside the PDFs, this is an estimate of when preliminary and final decisions are released.  Note that these data are based only on PDF file dates, and actual public release dates may have been earlier (if the dates we see are slight PDF revisions) or later (if documents were finalized significantly earlier than released). 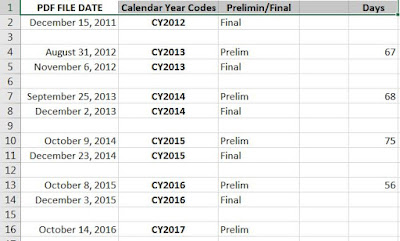 Note that in genomics, many "final" decisions are for gapfill, which then triggers a twelve month gapfill process.  Preliminary decisions (following the July meetings) are released as early as August 31, and as late as October 14.   This year's Preliminary release was the latest of the group, October 14, but in fact it was only a few days later than the prior two years.

Final decisions are as early as November 6 and as late as December 23, but often in December.